Gray barely gave his hip replacement surgery a second thought—he would be in and out of hospital within a few days. But for hundreds, possibly thousands of people who have been implanted with a Zimmer Durom Cup artificial hip, this type of surgery has turned into a nightmare. "I went in for a little arthritis in my hip and now I walk with a cane," says Gray, who has suffered with chronic pain since the surgery in June 2008. "Getting old isn't for sissies. 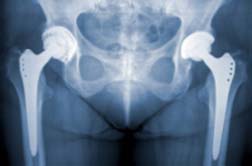 A few months after the first surgery (there are four!), when the Zimmer hip was initially implanted, the doctors discovered a cracked femur—further down toward my knee," explains Gray. "So the implant had to be removed, but my orthopedic surgeon decided to take some time and see if it would heal; it had been wired to keep from cracking any further. Nobody could explain how this happened—I didn't fall nor had I ever injured my leg. It was a mystery…

"A year later, almost to the day, I had a replacement of the replacement. The original Zimmer device had settled into the femur by about 1-1/12 inches and I was walking like a drunken sailor. We discussed the possibility that the artificial hip could have been the cause of the cracked femur but my surgeon said he'd never heard of it before. There's always a first time!

"So now I am home from the hospital four days later. My leg starts to swell from the groin—including my testicles—all the way down to my calf; my entire leg was almost twice the size as normal. I went to my GP and he shuttled me off to the ER. (Thankfully my son was around to help me.) They kept me in ER for a week to get the swelling down; again who knows what happened!

"This time, in their wisdom, the doctors at the local hospital made an appointment at the Vancouver General Hospital (VGH) clinic, where I was transported by ambulance. On July 7th they took out the replacement of the replacement and this time changed the type (but not the manufacturer—it is still made by Zimmer): They implanted a VerSys hip system and a Revitan proximal body. Four days later I went back to Chilliwack General where I was discharged and sent home.

"Everything went swimmingly for several months, until I got an infection and everything blew up again. I was back at the VGH and on August 16th, 2010, they did a 'washout,' which means they went into the original incision and cleaned out the infected area, packed it with antibiotics and closed it up. Four days later I'm back at home again.

"The result of all this? The infectious diseases specialist determined that I would have to be on Cipro, a heavy-duty antibiotic for the rest of my life. It is the kind that upsets your stomach and I can't have certain foods with Cipro and my iron levels are down because of the infection.

More ZIMMER DUROM CUP News
"To this day, no one has ever given me any answers—I think the doctors are afraid of a medical malpractice suit but I can't see any other reason for these revision surgeries other than the fact that I was given a defective device. Everyone I asked (I've been around 77 years);

"I went in for a little arthritis in my hip and now I walk with a cane. Getting old isn't for sissies. I've been a believer in the system all of my life—I come from a military background—and I don't question medical procedures, until now. I was looking for answers and couldn't get any. I was very surprised when I went online and read that one chap in particular had the same Zimmer Durom Cup and had the same amount of revision surgeries. When is it going to end? I think the only way is by lawsuits."