In spite of evidence that Yaz birth control pills have been found to increase the risk for blood clots (thrombosis) by 64 percent when compared to competing birth control products that don't contain progestrin drospirenone, Yaz manufacturer Bayer Healthcare Pharmaceuticals has resisted any suggestion of removing Yaz from the market. Instead, the manufacturer has introduced a new product that is essentially the original Yaz with a new feature. 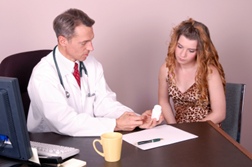 That feature, according to the October 6th issue of the Chicago Sun-Times, arrives through the addition of a folate supplement. The new birth control pill, dubbed Beyaz, has recently been given the nod by the US Food and Drug Administration (FDA).

Folate is a nutrient found naturally in some foods and is otherwise known as vitamin B9—and while an important nutrient for the human condition as a whole, B9/folate is especially important during pregnancy to ward against birth defects, preeclampsia and spina bifida.

The addition of Folate, also known as folic acid, to a birth control pill such as Beyaz is thought to build up B9 reserves and to give both mother and fetus a good head start in the event of an unexpected pregnancy.

Dr. Laura Berman, writing in the Sun-Times, notes that in spite of all the advances in medical science surrounding contraception, no contraceptive is 100 percent effective.

Yaz birth control is no exception. Plus there is the concern over Yaz blood clots, an adverse reaction that has caused serious health issues in many women. There have been some deaths. Yasmin is a close cousin to Yaz (and now, Beyaz), and remains a cause of similar concern for Yasmin side effects that can be just as grievous.

"While lawsuits continue to plague Bayer over the Yaz debacle," writes Dr. Berman, "some naysayers might wonder if this launch of Beyaz is simply a way to 'reinvent' that pill and take the focus off past concerns."

More YASMIN BIRTH CONTROL News
While not the exact same formulation as Yaz, Yasmin is similar and presents the potential for various Yasmin side effects akin to Yaz. And with Beyaz described as being a dressed-up version of Yaz, it can be assumed that concern for potential health issues and adverse reactions from Beyaz would be similar to Yaz.

Beyond the addition of folate, there was no indication of any change in formulation that might make Beyaz safer than Yaz. Dr. Berman writes that it's too early to judge Beyaz. "While our ancestors would be blown away by the options and freedom women now have when it comes to birth control," Dr. Berman writes, "we still haven't found a birth control pill that is safe, effective and free of serious side effects."

Yaz blood clots and Yasmin gallbladder problems among them.

Posted by
Wendy Edwards
on September 25, 2012
I was just wondering is there has been any issues of someone taking Beyaz then developing breast cancer?