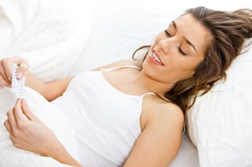 According to NPR on 8/23/10, Yaz made $800 million for Bayer HealthCare in 2009, due in part to all the claims Bayer made about what Yaz could do. In an interview with NPR, Ruth Day of Duke University and advisor to the US Food and Drug Administration (FDA) says the Yaz advertisements made "sweeping claims" which led young women to think Yaz could treat a variety of symptoms it could not.

Among those symptoms were mild acne and ordinary PMS (Yaz is approved to treat premenstrual dysphoric disorder). NPR reports that the FDA ordered Bayer to run a commercial correcting the claims made in the Yaz advertisements. Despite this, Yaz still became the top-selling birth control pill.

Yet Yaz comes with serious side effects, including blood clots, which 16-year-old Katie Anderson reportedly developed within a month of starting Yaz. Katie initially developed leg pain, which eventually turned into serious pain in her chest, shortness of breath and a completely numb leg, according to NPR. She was finally diagnosed with a blood clot.

More YASMIN BIRTH CONTROL News
Blood clots or portions of clots can eventually break off and lodge in the lungs. When this occurs, it is called a pulmonary embolism, which can be fatal.

Katie survived her ordeal and has filed a lawsuit against Bayer. Some women have not been so lucky.