A Texas woman is suing the maker of Yasmin birth control pills, claiming that the medication caused her to suffer massive brain damage. 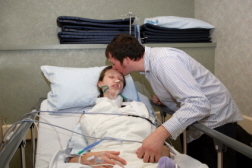 CBS11 reports that Rebecca Anderson-Hull suffered a pulmonary embolism, a blockage in the main artery of the lungs, two years after she began taking Yasmin. The embolism deprived Anderson-Hull of oxygen long enough to cause massive brain damage, forcing the mother of three to require the family's full-time care, according to doctors.

More YASMIN BIRTH CONTROL News
"A lot of the touted benefits of YAZ and Yasmin are attributable to the actions of drospirenone," Dr. Shezad Malik, Anderson-Hull's lawyer, told the news source. Yasmin and YAZ are the only available contraceptives that contain drospirenone, a synthetic progestin.

Dr. Malik told the news provider that that two recent studies by the British Medical Journal have called into question the safety of the medication.

Malik also told the news provider that he "undoubtedly" believes Yasmin and YAZ can cause serious health problems.

Anderson-Hull's family said they believe that Bayer, the makers of the Yasmin birth control pills, should be held financially accountable.