"I Paid the Makers of Yasmin to Kill Me"

Sherri H. was prescribed Yasmin for PMDD (premenstrual dysphoric disorder) and was on the birth control pill for two years, until she wound up in hospital with a blood clot in her lung. "I am furious that Yasmin or Yaz is riskier than other birth control pills," says Sherri," and I was giving Bayer $63 per month to kill me!" 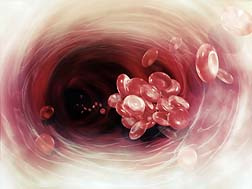 In May of this year, Sherri thought she had flu-like symptoms--she was throwing up and coughing—but then she started to spit up blood. "At first I thought the blood was from coughing too much but it got progressively worse," says Sherri.

"About a week later I took my daughter to her grad party and got a really bad pain across my back," adds Sherri. " I couldn't catch my breath; it felt like I was being smothered, and the pain was like a big cramp. And I was spitting up a lot of blood. I went to ER where they diagnosed me with pneumonia and sent me home. But three days later I was back in hospital, bent over in pain, it was horrible. I would rather have my daughter all over again than go through that.

This time they did a CAT Scan and found a blood clot in my right lung. The doctors think it traveled from my leg and that is probably why I was so sick.

They asked the usual questions: my history, if there were any heart attacks in family etc. I am 43 and in good health and there is no history of heart problems in my family; the only thing that fit the criteria was that I was taking birth control and a bit overweight—the only two things that would cause a blood clot. I stopped Yasmin right away.

I was in ICU for two days and in the hospital for a total of 5 days. Now I will have to be on a blood thinner for at least 6 months.

When I found out that a birth control pill could do this, I was shocked. Over the years I knew there was a chance of blood clots but you never think it will happen to you. Then I discovered all the lawsuits being filed against Bayer's Yasmin and Yaz.

More YASMIN BIRTH CONTROL News
I went online and discovered that I was at high risk. Bayer was in trouble for not giving out enough information and warnings. If I knew that Yasmin and Yaz are more dangerous than other birth control pills, I would never have taken it.

I have been on the pill for many years but to know Yasmin has a higher risk than other birth control pills is unbelievable. I have a 5-year-old and it just through the grace of god that I am still here. What would my child do without her mummy? It just made me angry, It isn't right. You trust the drug companies and assume they are putting out a product that is safe and well tested. Then to find out they are hiding information from you—that is infuriating."

Sherri is in the process of filing a lawsuit against Bayer, the manufacturer of Yasmin. LawyersandSettlements will check back with Sherri in a few months regarding her case.