Imagine you're a young woman in the prime of your life, with thoughts of a career, marriage and family. You're on a regular regimen of Yaz as that is what your doctor recommended, or you requested Yasmin birth control due to the advertising you've seen, or the added value benefits the Bayer product features. 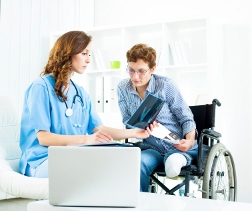 Suddenly, you are afflicted with Yasmin DVT (deep vein thrombosis) that affects your leg, and it needs to be amputated.

Your life changes, with no turning back. You look at the Yaz lawsuits out there, the ones you have heard about. And you wondered why they were necessary from such a seemingly innocent product. But now you know. And now, you have filed your own Yaz lawsuit.

Yasmin side effects—and those inherent with Yasmin's close product cousin Yaz—affect people in different ways, and some more serious than others. In the case of the unnamed plaintiff whose legal team filed a lawsuit on her behalf in US District Court for the Southern District of Illinois on May 24 of this year, the Yaz side effects she experienced were so severe it required the amputation of her right leg.

According to a release from PR Web (8/7/12), the plaintiff cites in her lawsuit injuries including, but not limited to the required leg amputation to save her life, mental anguish and ongoing emotional distress encumbered by the fear of suffering additional health problems. The plaintiff also cites increased medical expenses.

More YASMIN BIRTH CONTROL News
Yaz birth control pills, together with the Yasmin pill, belong to the so-called third-generation of oral contraceptives that employ a synthetic hormone (drospirenone). According to various studies and Yaz lawsuits, the contraceptives manufactured and vended by Bayer have a higher risk of Yaz blood clots, stroke and other Yaz side effects than older oral contraceptives using a more traditional formulation.

Bayer has consistently defended its product, and doctors appear to be divided. Still, to date there have been over 12,000 lawsuits brought against Bayer Healthcare Pharmaceuticals Inc. by disgruntled plaintiffs who have been injured, or by the estates of those who have died.

The plaintiff in the Illinois lawsuit, who hails from Wisconsin, accuses Bayer of, in part, fraudulent misrepresentation. The plaintiff also alleges had she known about the risks associated with Yaz birth control pills, she would not have used them and may not have suffered the Yaz DVT that ultimately cost the woman her leg. She accuses Bayer of not properly disclosing the risks associated with Yaz.