“I hope I can save someone’s life by telling my story,” says Tresa, a fitness instructor, who suffered a Yasmin pulmonary embolism. “I was misdiagnosed by the doctor and again in the hospital and I should be six feet under by now,” she adds, laughing. What a trooper. 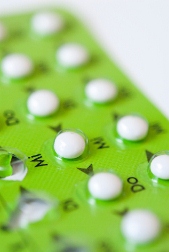 Although 45-year-old Tresa is making a rapid recovery - she got out of the hospital just last month - Yasmin has taken its toll on her lifestyle and, of course, her career. And all because Bayer advertised Yasmin as a treatment for acne, that it was good for your bones, yada yada. It did help Tresa’s complexion, but at the same time, it almost killed her.

“I started taking Yasmin about five years ago and my doctor monitored me every year,” says Tresa. “I am fit and healthy and I don’t smoke or drink so he didn’t see any harm in me taking it.

“One day when I was teaching a fitness class. I thought I pulled a calf muscle but I just worked through it, took a few Ibuprofen and the pain subsided. A few weeks later I thought I pulled my inner thigh muscle. Again, I chalked it up to overdoing it.

“Shortly after that incident, I woke in the middle of the night and couldn’t breathe. I had severe pain in my chest, shoulder and back. My husband Mickey wanted to take me to ER. He had just had surgery so I took one of his Tylenol 3 painkillers instead and I slept the rest of the night sitting up. I hate going to ER.” In hindsight, Tresa should have listened to Mickey.

The next morning she saw her doctor and he diagnosed pleurisy. It didn’t occur to Tresa to mention the muscle issues because she pulls muscles all the time - it just goes with the job. If she was sedentary with leg pains, it probably would have been brought up. Instead, Tresa’s doctor gave her an antibiotic injection and anti-inflammatory pain killer and sent her home.

She was back in his office less than 24 hours later with more breathing problems. This time they ran gallbladder tests and x-rays and the radiologist report indicated pneumonia. She was prescribed Zithromax Z-Pak and, again, simply sent home. It was the weekend. Tresa was hurting but she didn’t have a fever and she wasn’t coughing, so how could she have pneumonia? “My cousin is a physician so I called her,” says Tresa. And that call likely saved her life.

“Right away she asked me if I was still on Yasmin,” Tresa explains. (Interestingly, the hospital doctors didn’t ask if Tresa was taking drospirenone birth control pills but Yasmin had been recorded on her medical chart.) “Then she asked if I had any other problems, like muscle spasms or pulled muscles in my legs. Affirmative. She asked if they were in the same leg. Yep.

“Next up, my cousin told me to go online and look up pulmonary embolism. She was talking to me the entire time and asked if they were my symptoms. ‘Take a few aspirin and tell Mickey to take you to ER right now,’ she said. Mickey was in the next room - it was Super Bowl Sunday - and it took one second to get him off the couch.

“It was a nightmare when we got to the hospital. My cousin told me to get a CT Scan with dye to check for blood clots. She explained that the dye would show the clot and the CT Scan would show muscles. But they didn’t run the dye test, and to this day, I don’t know why. The CT Scan showed fluid on my lung but no clot.”

Tresa was admitted, and the next day she had another CT Scan and a cardiogram but nothing explained the fluid on her lung. Finally they ran an ultrasound on her leg and found the blood clot. The ultrasound showed a clot behind Tresa’s knee and another in her thigh. A doctor explained to her that the calf pain would have been when the Yasmin DVT started. Then it broke off, went to her thigh, and got lodged in her quad muscle.

“I got lucky because the clot in my thigh shattered and little blood clots got into the pleura of my lung,” Tresa explains. “That explains the pain in my chest, and because of the fluid, my lung wasn’t getting any circulation. My doctor said eventually I would have probably lost a lung. I now have lung infarction, which means that the bottom part of my lung is dead.” (If a large blood clot blocks the artery in the lung, blood flow may be completely stopped, causing sudden death. Tresa knows she is lucky to be alive.)

“At the time, when I found out that I had pulmonary emboli, I was more mad than scared,” Tresa adds. “All the tests and all they injected me with in that week was the equivalent of three years of radiation and that can cause cancer. The cardiologist said he didn’t want to run a CT Scan with dye now because I had already been given too much radiation and I should have had the CT Scan with dye as soon as I was admitted. The doctor admitted their mistake.

“I threatened to sue the hospital. Interestingly, I still haven’t received a bill from them and I have to co-pay and I was off work for six weeks - cha-ching. As for my health, I have to take the blood thinner xarelto for at least six months. I’m tired most of the time but I’m trying to get my energy level back. My lung capacity is not like it was and I can’t do the things I used to do. I have no idea if I can ever get back to the fitness level I was at before this happened. As you can guess, I’m really mad at Bayer, the maker of Yasmin.

“When the hospital cardiologist asked me which birth control pill I was taking and I said Yasmin, he unhesitatingly said that was the cause of the pulmonary emboli. My medical record states as much. He also said that no one over 40 should be on birth control pills.

More YASMIN BIRTH CONTROL News
“So why is Yasmin and Yaz and other drosperinone birth control pills still on the market? It’s quite a simple answer and one the cardiologist explained to me. ‘Because Bayer would rather pay off someone like you a few thousand dollars and continue to make billions of dollars,’ he said. They just want to keep their drugs on the market, profits over people.

“I still don’t understand how they can make this drug and keep it on the market - it should be illegal. I still see commercials on TV about the benefits of Yasmin. I had a box left. I looked all over the package for warnings and all I could find was a blurb on the insert, which says there are side effects of clotting for women over 35 who smoke.

“I find it incredulous that some hospitals are still not aware of Yasmin blood clots so I really want to get the word out. I’m having complexion problems again but I’ll take a pimple over being dead.”

Posted by
eugiegenie
on June 14, 2016
Thank you for publishing this story here, and it literally saved my life! It was just a usual Saturday night when I felt that my neck was quite painful, and I thought it must've just been a tired/sore neck. That night when I went to bed, I started feeling discomfort and pain in the left side of my body. When I woke up the next day, I noticed I had shortness of breath, and whenever I took in deep breaths, the left side of my body (neck, shoulder, and chest) would tighten and hurt. I thought I may have strained something, but I never thought it would be serious. In the afternoon, I started coughing, and there was blood in my phlegm. That's when I started to worry, and so I called my usual GP, and he said it should be fine, but I could see him if I was worried. I started googling my symptoms and saw this post, and got a little worried, so I decided to see a doctor at night if things didn't get better. By dinner time, I didn't have much appetite, and the pain seemed to have spread to my back too, so I decided to see a doctor, which he instantly referred me to a hospital. It turned out that there were blood clots on both sides of my lungs, and there were also blood clots in my pelvic area. I spent 3 weeks in hospital, and am still recovering slowly. Pulmonary Embolism is very rare amongst younger people here in Hong Kong, and doctors were very shocked to see my scan results! I was the one who told my doctors that I had been taking Yaz, and I read online that Yaz can cause Pulmonary Embolism. The doctor then went to do some research to confirm my findings. There were not many reported cases of people having blood clots from taking birth control pills in Hong Kong. The doctors and nurses complimented me for googling my symptoms and seeking medical help so soon. I'm so lucky to be alive, but as a mother of two at age 28, this has definitely changed my life as I can no longer play with my kids the way I used to. This was definitely the most horrendous experience that could happen to anyone, and we do need to get the word out so that people can avoid this!
Posted by
Amy Beukes
on September 4, 2015
I just thought I'd comment because I had the exact same experience with Yasmin. I went to my usual boxing class the monday and wednesday and over those days an incredible sharp pain was shooting all over my chest. I thought I had just pulled something in boxing and tried to stretch it out. The wednesday night the pain got progressively worse, but it was the long Easter weekend and I didn't want to go to the ER. I tried to stretch again and tried to lie on my back and screamed out in pain. It was absolutely excruciatingly painful. I couldn't sleep through the night and woke up crying at 5am and asked my boyfriend to take me to the ER. It turned out I had multiple blood clots on each of my lungs. Spent a week in intensive care, lost a lot of weight and still struggle with energy and fitness today. It was really hard for me because I am only 20 years old. If i get another clot, I am on xarelto for the rest of my life. A portion on both sides of my lungs also died. I know I am lucky to be alive and count my blessings everyday. However, it makes me so mad that Yasmin/Yaz/most birth control pills are still being sold in the interest of profiting. It was the most horrendous experience that I do not wish on anyone, and I sincerely hope or would like something to be done about it.