Xarelto Verdict for the Plaintiff Overturned in Bellwether Case

Speculation was that a nearly $28 million Xarelto verdict in favor of the plaintiff might be overturned. And it was - but not for reasons that were first feared…

A jury verdict in favor of the plaintiff in a bellwether Xarelto lawsuit that was in danger of being overturned was, indeed tossed - but not for reasons that had been previously speculated. 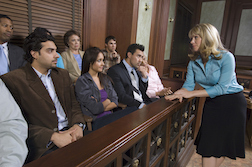 The case is Hartman v. Janssen Pharmaceuticals Inc. et al., Case no. 160503416, in the Court of Common Pleas of Philadelphia County, Pennsylvania. A jury in Philadelphia awarded the plaintiff $1.8 million in compensatory damages and $26 million in punitive damages. It was the first loss of a bellwether case by the manufacturers of Xarelto, after three previous federal cases had favored the defendants.


However, following the Philadelphia win there was speculation the decision favoring the plaintiff was in danger of being overturned due to various posts to social media by members of the plaintiff legal team that defendants claimed could have prejudiced the jury.

In the end, the jury verdict and the award to the plaintiff was, indeed overturned - but not for any reasons associated with social media.

Rather, the decision was overturned by Judge Michael Erdos, of the Philadelphia Court of Common Pleas based on testimony given by the plaintiff's prescribing physician. In her testimony, plaintiff Lynn Hartman's physician noted that Xarelto was marketed amidst claims that the new-age anti-coagulant did not require patients to undergo a prothrombin test, or PT test, which tests for coagulation levels. In her testimony, the doctor suggested that had she submitted her patient to a PT test, she would have informed her patient about the risks for Xarelto bleedout and thus, her patient - the plaintiff - would likely have used a different anticoagulant.

The bellwether jury verdict was overturned over speculative testimony


In reviewing the testimony, the judge in the case viewed this as purely speculative and thus, insufficient to warrant a damages award. He did, however rule that there had been sufficient evidence to warrant the punitive damages award.

The Hartman Xarelto lawsuit is nonetheless overturned pending an appeal. However, it has been reported that the judge's findings with regard to the punitive damages award carries implications for hundreds of cases pending in the Xarelto mass tort in Philadelphia.

Xarelto (rivaroxaban) was introduced in 2011 as the second latter-generation blood thinner after Pradaxa. Both anticoagulants promised an easier time for patients and their doctors, who for years had been lamenting the need for constant monitoring and strict diets associated with the use of warfarin, marketed as Coumadin. The latter has been the gold standard for anticoagulants for 50 years or more and has been proven effective. However, the need for monitoring and diet restrictions was proving to be a drain on health care services, with patients and doctors long seeking an easier alternative that would achieve the same results with less fuss.

Plaintiffs fault Xarelto for lack of antidote, and bleeding risk


That wish was granted with the arrival of Pradaxa and soon after, in 2011, Xarelto - which is manufactured by Bayer and marketed in the US by Janssen, a subsidiary of Johnson and Johnson. Xarelto promised a less-intensive requirement for monitoring than Coumadin, and patients and their doctors embraced the two, new-age blood thinners in droves.

More XARELTO News
However, unlike warfarin (Coumadin) which can be reversed with an infusion of Vitamin K, Pradaxa and Xarelto were brought to market with the blessing of the US Food and Drug Administration without a reversing agent. Thus, in the face of a serious Xarelto bleeding issue there were fewer options in a doctor's toolkit to stem the bleeding. Many episodes of Xarelto bleedout have resulted in serious health complications for the patient, and in some cases, Xarelto death.

Plaintiffs claim that had they known about the lack of a reversing agent, they would have chosen another drug and fault the manufacturers for being less than forthcoming with regard to the lack of an antidote. Plaintiffs also assert it was irresponsible on the part of the manufacturers and marketers to claim that less monitoring was required, when the lack of a reversing agent suggested that constant monitoring was even more important than ever.

There are some 20,000 Xarelto side effects lawsuits pending in both federal court and the mass tort in Philadelphia. All allege Xarelto bleeding complications.