A Xarelto Lawsuit filed this past March raises a lot of the same questions other plaintiffs have been raising with regard to Xarelto Bleeding complications that can’t be stopped as easily as similar bleedouts associated with use of the much older Coumadin (warfarin). 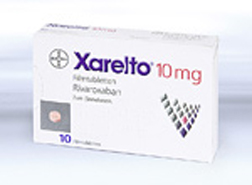 The latter is a heritage blood thinner that requires constant monitoring to help prevent unexpected bleeding events - an anticoagulant, however, that has the potential for reversing its blood-thinning properties with an infusion of vitamin K.

Xarelto was released to the market with no such option - and for many, a Xarelto Bleedout has resulted in Xarelto death when a hemorrhage could not be stemmed due to the lack of an antidote. Plaintiffs have maintained they were not aware of this, and would have avoided Xarelto, in spite of its added convenience, in an effort to avoid a potentially catastrophic event.

But now there is a new wrinkle - Xarelto Bleedout lawsuits that allege manufacturers Johnson & Johnson and Janssen Research & Development LLC were negligent in promoting Xarelto as a safe and effective alternative to Coumadin that did not require the same kind of stringent monitoring required of warfarin. Plaintiffs - as well as a growing cacophony in the medical community - are now saying that monitoring is especially important for a product that carries no capacity for reversal, should catastrophic Xarelto Bleeding complications occur.

That’s an accusation contained in a Xarelto lawsuit brought by the son of a Xarelto patient who died an alleged Xarelto Death due to a Xarelto Bleedout that could not be contained. According to court documents, Tommy Julien was prescribed Xarelto to help treat his atrial fibrillation, which put him at risk for stroke. That was in November 2012.

Five months later Julien was back in the hospital with serious internal bleeding, from which he could not recover. He died on March 29, 2013.

More XARELTO News
Julien’s son Danny Julien has launched a Xarelto Lawsuit alleging failure to warn about the absence of an appropriate reversing agent, and negligence in promoting the safety, efficacy and convenience of a product that in the plaintiff’s view is not safe at all without strict monitoring and the availability of an antidote. Julien states in his Xarelto lawsuit that such deficiencies and failures were undertaken “willfully, intentionally, and with reckless disregard of the life and safety of the Decedent and the general public.”

He seeks in excess of $75,000 in compensatory and punitive damages.

The lawsuit alleging Xarelto Death, Xarelto Bleeding complications and Xarelto Side Effects is one of over a thousand similar cases consolidated in multidistrict litigation before US District Judge Eldon E. Fallon in the Eastern District of Louisiana. The first bellwether lawsuit is expected for August 2016.