More WRONGFUL DEATH News
The father of a suspected shoplifter who was strangled to death by a drug store employee while an off-duty police officer stood only feet away has filed a wrongful death lawsuit against the pharmacy. 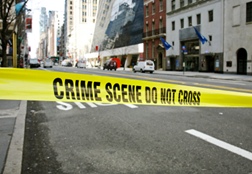 According to official reports, an unidentified CVS manager chased 34-year-old Anthony Kyser out of the store and into a nearby alley in an attempt to arrest the man for shoplifting. At some point the manager administered what has been described simply as "a choke hold" to Kyser and refused to let go, despite Kyser's continued pleas that he could not breathe. Kyser later died from the strangulation.

Initial police reports claimed that an unidentified off-duty corrections officer identified herself, dialed 911 and waited for an ambulance to arrive before departing the scene. These claims were later refuted by eyewitnesses and video surveillance, which showed the officer drawing her weapon and telling Kyser not to struggle, and staying on the scene until the police arrived to place the blame on the deceased shoplifter.

Police are treating the death as accidental and refuse to prosecute the CVS manager.

The lawsuit holds the convenience store chain responsible for the battering, false imprisonment and eventual death of Kyser, with the plaintiff seeking more than $400,000 in damages and fees.