More WRONGFUL DEATH News
A wrongful death lawsuit stemming from the 2005 death of an unarmed 27-year-old man in a police confrontation has been settled by Clackamas County to the tune of $1 million. 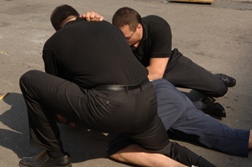 Fouad Kaady was suspected in three hit-and-run crashes—incidents the Kaady family lawyer claims were the result of a fire in Fouad's automobile. When Kaady emerged from his car naked, burned and bleeding, the police fired a stun gun at him. At that point, the young man climbed on top of a police cruiser, provoking the officers to open fire. He was shot to death by a Sandy police officer and a county sheriff's deputy.

This settlement, which was entered in the U.S. District Court in Portland, is the latest in a string of lawsuits stemming from the incident. The grand jury had previously cleared the two officers of wrongdoing, and the Kaadys won a similar $1 million settlement from the city of Sandy and the sheriff's department.

"The family decided that rather than go through the trauma of a three-week trial, where they would relive the death of a loved one, that in the settlements, they got some justice," said the Kaadys' attorney, Kent Spence. "They got the case closed and they have decided to move on."

If you or a loved one have suffered losses in this case, please click the link below and your complaint will be sent to a criminal law lawyer who may evaluate your Wrongful Death claim at no cost or obligation.
Request Legal Help Now