California attorney Peter Williamson is fast becoming Taser International's worst nightmare. Over the last decade and more, the makers of the controversial handheld electroshock gun have been the target of dozens of lawsuits, ranging from product liability to police misconduct and wrongful death. However, Williamson and his co-counsel John Burton are the first attorneys to obtain a favorable verdict on behalf of a plaintiff. 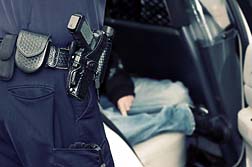 In a David and Goliath case suit against Taser International this September, a jury ordered to the company to pay $153,000 to the family of Robert Heston. Heston, who was high on methamphetamine at the time, died after police fired at him 25 times with taser-electroshocks in an attempt to subdue him.

The Heston jury found that Taser International failed to warn police about the potential cardiac arrest risks associated with the use of the weapon.

As many as 70 other taser victims have attempted to sue Taser International, but few, if any, even came to trial before the Heston case.

The Taser International legal team frequently employed the Daubert Challenge, which essentially gives a judge the power to determine who may or may not be considered an expert witness. Because there was so little scientific data available regarding tasers, the tactic successfully eliminated the vast majority of potential plaintiff experts.

Attorney Williamson says that Taser International, once apparently immune from civil suits, is beginning to show cracks in its once-impenetrable walls. He spent thousands of hours preparing for the Heston case.

"We are totally attuned to all the research that is coming out," says Williamson. "I actually have my Google news alert set to 'taser'. So everyday I get a compendium of stories from all over the country – every death case, every incident of taser firing so we really keep tabs on what is going on."

Williamson now focuses the largest part of his practice on taser complaints. Since he began working on the Heston case in 2005 he has built a considerable and formidable body of knowledge on everything from ventricular defibrillation to metabolic acidosis. Perhaps most important of all, he has a rolodex full of expert contacts.

More WRONGFUL DEATH News
"I don't want to sound immodest, and I really think we are at the forefront of this litigation," says Williamson. "I know who most of the players are in this country. I know most of the scientists are. I know the medical doctors, I know the experts."

Taser International called the Heston verdict a fluke and claimed that the jury's decision was a sympathy vote. "That's comical," says Williamson. "This guy was high on methamphetamine and acting crazy. But obviously we didn't think he should have been tasered 25 times."

Peter Williamson is a name partner with the firm of Williamson & Krauss in Woodland Hills, California. He obtained his Bachelor's Degree from Rutgers University and his Juris Doctor from Southwestern University School of Law in Los Angeles.

Posted by
rouchell johnson
on July 5, 2011
i also was tazed over 20 times in 2006 i live in mobile Al i tried finding a local lawyer but noone would take my case against the local police i also have recently been tazed i wasnt charged in 2006 for commiting any crime i know the police were trying to kill me i was lucky my mother-in-law screamed at them to make them stop