Why Hazing Cases Don't Go Away

Attorney Doug Fierberg may be one of the few attorneys in the US who specializes in representing hazing victims and their families. Because of his expert understanding of the old and sometimes deadly practice of fraternity hazing, Fierberg is often called upon--sometimes by the media and/or by grieving families with wrongful death suits--when a freshman dies from too much alcohol or a sorority girl is sexually assaulted. 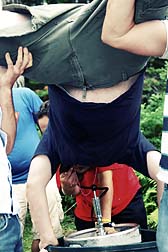 "I spend a significant amount of my time with grieving parents who for the first time are learning about the substantial risks of frat membership," says Fierberg. "Picture yourself sending your son off to college. Then three weeks later, you have to go pick him up because he is dead; all because of the unanticipated and completely preventable death of your child at a hazing ritual."

Carson Starkey
His most recent high profile case is the death of Carson Starkey. Starkey was an 18-year-old freshman from Austin, Texas when he died of alcohol poisoning after a hazing ritual at California Polytechnic State University in December of 2008. "It occurred at a ritual (known as the big brother – little brother night) that the fraternity industry knows and has itself identified as one of the three deadliest nights in a fraternity," says Fierberg.

Pledges were tasked to drink large quantities of alcohol at a so-called "brown bag" event. According to the suit, fraternity members were chanting "puke and rally", and urging pledges to consume more and more alcohol.

Starkey's parents are suing the Illinois based fraternity Sigma Alpha Epsilon and nine of its members, alleging four counts of negligence and a violation of Matt's Law, a California law that allows for lawsuits when hazing results in injury or death.

The Fraternity Industry
Not surprisingly, Fierberg is sharply critical of what he refers to the as "fraternity industry".

"It is a business that develops revenue and employs people to initiate people into fraternities on college campuses across the country," says Fierberg.

"It is a multi-million dollar business," Fierberg adds. "The money goes to the national fraternity and to numerous corporations connected to those entities and to purchasing prime real estate on college campuses across the country."

Frat Insurance
According Fierberg's research, fraternity hazing has resulted in at least one death or more every year since 1970. The practice, however, continues despite the deaths, the increasing insurance costs for fraternities and the lawsuits and laws against aggressive hazing.

"Although fraternities are considered the 6th worst insurance risk in the nation, fraternities have simply increased their coverage amounts to pay for lawsuits," says Fierberg. Managing the risky behavior is left to the judgment of intoxicated teenagers. "The idea of placing life and death decisions in the hands of 19-year-olds has proven deficient and dangerous for many years."

Fierberg says you can look at fraternities as a kind of prehistoric version of Linked-In, the online networking service. The difference is that joining Linked-In does not require you to put your life in danger.

More Wrongful Death News
"When you become a frat member it is advertised and promoted," explains Fierberg. "You have a life long membership. The frat literature has pictures of 'old guys' that go back hundreds of years. Your frat brothers are contacts you can supposedly depend on for the rest of your life."

"There's an allure there that I don't understand," says Fierberg, "but it is there. Ideally, there should be substantial changes in the way college campuses recruit fraternity members. But if it costs the fraternity money or members, it doesn't happen."

Doug Fierberg is a partner and trial lawyer with the firm Bode & Grenier in Washington DC. In his personal injury work, Fierberg has represented victims of auto and other accidents, as well as victims of hazing, sexual assault and other violent misconduct in schools or institutions such as camps, juvenile mental health and other settings.
READ ABOUT Wrongful Death LAWSUITS