It took almost three decades for some of the families affected by the E-Ferol tragedy to be awarded compensation for the wrongful death or injury caused to their premature babies. According to attorney Art Brender, whose Fort Worth firm spent more than seven years litigating on behalf many of those families, they wanted more than compensation. "The mothers of the babies just wanted to know what happened," Brender says. 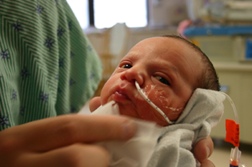 "They weren't getting an explanation from the doctors more than compensation. In fairness, I think the doctors didn't know at that time and even when E-Ferol was recalled it wasn't explained."

Although all but forgotten by the public, the E-Ferol disaster was one of the most deadly pharmaceutical errors in American history. Among Brender's clients, 24 babies died and another 48 were left with serious brain damage. At least another 50 babies across the US also died, according the Center for Disease Control.

In the early 1980s, with the number of preemies on the rise, doctors were looking for a way to help immature lungs better absorb oxygen. Without sufficient oxygen, some babies can go blind.

Two small drug companies combined the oxygenating effects of Vitamin E with Polysorbate 80, an emulsifier commonly used as a food additive, to create E-Ferol. It was added to saline and injected into the babies.

O'Neal/Jones & Feldman Pharmaceuticals began marketing E-Ferol in the fall of 1983 as a vitamin supplement. The product was never submitted for FDA approval. "They did no testing at all and didn't even review the literature," says Brender in his quiet, thoughtful voice. "If they had they would have found animal studies showing that Polysorbate 80 can cause liver problems."

Within a week, otherwise healthy premature babies injected with E-Ferol began to show signs of what is now referred to as "E-Ferol Syndrome." Their livers and kidneys failed. Some developed brain damage. Others died.

More WRONGFUL DEATH News
"The children appeared to thriving and gaining weight then all of a sudden, things went downhill," says Brender. "And virtually all the women I dealt with beat themselves up and felt like it was something they had done wrong."

By April 1984 E-Ferol was pulled off the market and the drug company principles did a short time in jail.

Brender and his firm spent untold hours working on the E-Ferol litigation. His clients will split a $90 million recovery depending on their individual circumstances. But the damage is done, and the lives destroyed in just a few months in 1983 and 1984 can never be recovered.

Art Brender is the senior attorney at Art Brender Law in Fort Worth, Texas. The practice includes personal injury and property damage, defective product liability, accidents, civil and criminal law. The firm was established in 1973.