Wrongful Termination: "We call it the Homeland of Insecurity."

Asbestos is deadly stuff. It's a known carcinogen and the prime cause of mesothelioma as well as asbestosis, a potentially fatal scarring of the lungs. If you were exposed to asbestos at work, you would probably expect better treatment than immediate wrongful termination. But that, says Leroy F., is exactly what happened to him.

Leroy worked as a carpenter in the Public Works department of the US Coast Guard Academy (USCGA) in New London for over 16 years. Last July he was assigned to remove tiles from two rooms in an academy building. After completing the work, he became concerned that he may have been exposed to asbestos from airborne dust while removing the tiles; he raised the question with academy officials.

"It was the end of July. The ventilation system was on high and that stuff was flying everywhere," Leroy told The Day, a local newspaper. Subsequent testing revealed that the glue used to hold down the tiles did indeed contain asbestos. An asbestos removal specialist was contracted to remove this hazardous material, as required by law. 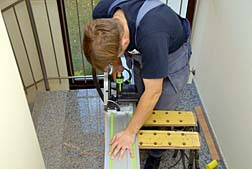 On July 25, Leroy was put on administrative leave—and in November, he was fired as "unfit for duty" on unrelated medical grounds. He was also told that his possible asbestos exposure was "extremely minimal" and would not require medical monitoring. Leroy's own doctor, however, has told him that he must be checked annually for the next five years.

The academy says that Leroy was terminated for psychological reasons because of erratic behavior. If that's the case, Leroy responds, how do they account for his fourteen annual outstanding performance awards and his special recognition for mentorship of USCGA cadets? He says that he was wrongfully terminated as a whistleblower for raising the asbestos issue and for previously questioning unsafe work assignments.

More News
To Leroy, his termination was part of "the corruption, the corrosiveness that goes on here on a daily basis. The Public Works system is so bad that five more civil service workers have resigned since my removal on July 25.

"This particular problem at the Coast Guard Academy will always be ongoing, so we call it the Homeland of Insecurity, since our jobs are very insecure because of the threats that are given every day by the Department of Public Works."

Since his termination, Leroy has been unemployed; his lawyer says that hr may have a case against the academy that includes asbestos exposure, violations of the Americans with Disabilities Act and federal whistleblower protection rules, and wrongful termination. For Leroy, it's even simpler; he says, "I know what I did was right."

If you believe you have been wrongfully terminated from your job, please contact a lawyer involved in a possible [Wrongful Termination Lawsuit] to review your case at no cost or obligation.
Request Legal Help Now