Whistleblower: "They dug themselves a deep hole"

When Ray Boutilier was evacuated from New Orleans in the wake of Hurricane Katrina, he hoped to build a new life in Eugene, Oregon. Little did he know that he would become a whistleblower swept up in a hurricane of labor law violations, illegal gambling, and employer blacklisting.

In November 2005, Boutilier (not his real name due to ongoing legal proceedings) was hired as a dealer in a nightclub game card room that was supposedly operating a legal "social game" of poker.

Boutilier says, "Certain cities out here allow 'social gaming' by local ordinance—you get people together who want to play cards at home or in a bar or wherever. They can play for money, but there's a two-dollar limit to keep it from getting out of control." Eugene's social gaming ordinance forbids the host, whether a homeowner or business, to derive any profit from the gambling. 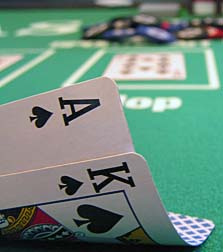 It didn't take Boutilier long to notice two things wrong: First, he and the dozen other cardroom dealers were working for tips only and not an hourly minimum wage as required by federal law. Second, the cardroom manager was taking a "table rake" from every hand played, a felony under the social gaming ordinance. "Our supervisor didn't work there," Boutilier says. "He just came in and picked up the envelopes full of cash from the drop box and left—he was the nightclub owner's errand boy. These two individuals collected an average of $6000 a month for doing absolutely no work and not paying the exploited labor they used to collect it."

When Boutilier reported the situation to state and federal authorities, they told him that as a dealer in a illegal gambling operation, he could be subject to prosecution; additionally, the cardroom customers could be fined $500 each "for just sitting at the tables." Beyond that, Boutilier says, "Everyone else who worked there could also lose their jobs—the dealers, the bartenders, the bouncers, the cooks, the waitresses, even the janitor—because the club's liquor license would be revoked." Boutilier notes, "Understand that I desperately needed my job, but not so much as to put the jobs and livelihood of my fellow co-workers at risk. Something had to be done."

After gathering information from state and federal authorities, in late February 2006, Boutilier hand delivered a detailed letter in good faith to the club's upper management about the labor violations and the illegal gambling rake. He outlined the laws being violated, the clubroom manager's abusive and illegal behavior, and the likely legal consequences.

Boutilier found that his own troubles had just begun. When he looked for other work, he discovered that the club management had given bad references claiming Boutilier had never worked there, and approached other local businesses, warning them against hiring him. When the state and federal labor departments ordered the club to pay the cardroom dealers back wages as employees, Boutilier was the only one who went unpaid, and could not collect unemployment.

Currently, the nightclub management faces two separate trials. According to Boutilier, "If they get dragged into court, they're looking at possibly additional fines and charges for conspiracy, fraud and money laundering—using a legitimate business as a coverup for an illegal operation. Plus they deliberately obstructed state and federal investigations. They're looking at serious jail time."

Boutilier has filed a civil suit against his former employer. The first, handled by the Labor Department, is slated for January 2008 and seeks to recover his past due wages. In the second, set for trial in August 2008, Boutilier' attorney is seeking more than $645,000 in damages for illegal employment practices, slander, and defamation. In the meantime, the club remains open.

More News
Boutilier has not found work since being fired. Currently he is barely making ends meet selling his artwork through local gallery shows. One piece of good news is that since January 1, 2007, partly due to Boutilier's efforts, Eugene's social gaming ordinance must be posted in any club running a cardroom. "That way they can't continue to victimize others by blatantly lying to the customers and staff about the legality of their duties, which is exactly what their racketeering operation hinged upon." Boutilier declares.

At the end of the day, Boutilier says, "The club management could have made the right choice when I brought these issues to their attention, but they chose otherwise. The owner's only motive was the thousands of dollars in undocumented, tax-free cash that crossed his palms—and not caring who he put at risk."