Hospital Hit with Loss of Medicare and Medicaid Payments

Litigation has been brought against Haywood Regional Medical Center by former employee Dr. Aloha Bryson. The doctor was pressured to resign for presenting allegations that two patients died due to improper care and four others received improper care as well during October and November 2007.

Dr. Aloha Bryson has had a degree of difficulty locating another position in North Carolina since the incident. She is viewed as a whistleblower throughout the medical community in the state. Following on the heels of Dr. Bryson's case is North Carolina legislators' decision to relinquish Medicare and Medicaid payments to Haywood Regional Medical Center. Some state inspections provided evidence of negligence on the part of the hospital. In one inspection, the state found what is being termed "immediate jeopardy" for the way in which hospital employees provided patients with medication. The investigation ensued by the state in January, 2008 after Bryson's reports. 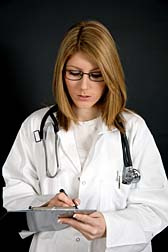 Sixty-eight percent of the revenue that the hospital received was from Medicare and Medicaid payments for patient care. The hospital may have to either drastically reduce the number of employees or close its doors altogether. Some patients have already been moved to other medical care facilities.

The lawsuit from Bryson alleges that nurses were sleeping while on duty and using cellphones to send text messages. This is strongly prohibited at Haywood Regional Medical Center along with Internet usage. Nurses found engaging in these activities while on duty are supposed to be sent home immediately. A memo circulated through the nursing staff giving a direct message that this was their final warning about the situation.

Also, within the lawsuit Bryson reports that the administration told her not to write out formal reports, but to just meet with the risk manager in person. The hospital administration told Bryson to cater a breakfast for the nursing staff that were upset by her numerous reports. She was chaperoned from the hospital by security staff, while onlookers of patients and staff watched her departure on December 3, 2007. Bryson was employed by an employment contractor, PrimeDoc Management Services Inc., who told her on December 4, 2007 that she could choose to either be fired or resign her position.

More News
Administration for Haywood Regional Medical Center says they are working hard to address the issues the state found in their inspections. The inspections mostly addressed concerns about some of the nursing staff's inability to properly supply patients with the correct dosage of medication. Staff members were sometimes not giving patients the amount doctor's prescribed to them. The state is not releasing all of the details of its findings about the hospital at this time. Officials are saying that their findings are of a serious nature and are beyond just infractions of forgetting to wash hands after caring for parents. Haywood has reduced its margin of error rate in giving out medication from 11% to 2.7%. This is within the 5% reduction required by the state for improvement. Haywood Regional Medical Center is one of five hospitals that lost its Medicare funding in the same manner out of 6700 hospitals throughout the country.