In March 2009 Dale Adams, a former employee of Tyson Foods, filed a lawsuit in the U.S. District Court against Tyson Foods Inc. Adams blew the whistle on the world's largest meat processor and the second largest chicken producer in the US when he revealed that one of its plants was washing off chickens that had fallen to the floor and were supposed to be condemned by the USDA. And Adams alleges his whistleblower action caused his termination. 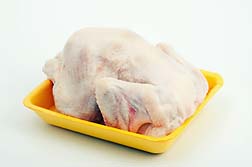 "Whistle blowers like me will just take these matters to the media and the public when a company like Tyson causes undue and unnecessary harm," says Adams, who also filed suit with the State of Arkansas Unemployment office for wrongful dismissal. "I exposed food safety and USDA violations to Tyson management and within one hour I was wrongfully suspended and within three days was wrongfully terminated."

Adams worked at Tyson since 2008 where he deboned chickens on the processing line."They were washing chickens that had fallen on the floor—they were dead," says Adams. "These chickens were supposed to be condemned by the USDA but instead they were put back on the line for food consumption. Tyson was committing fraud by saying they provide safe food to the public, but they don't."

Adams wrote a press release titled " Tyson foods facing lawsuit for violating federal laws again," and he showed it to a coworker. He claims that Tyson management suspended him with the excuse that he had a cell phone on the job, even though Adams says about 70 percent of employees carry cell phones. "My coworker, the same guy who read the press release, overheard the manager say, ' We have to get rid of this Mother F** ker', and I have affidavits to prove everything.

"Consumers suspect that food companies are unethical and pick food up off the floor to produce profits," says Adams. " It had never been proven and made public until now. It may be a very long time before consumers choose to buy Tyson chicken again."

This isn't the first time Tyson Foods has battled the USDA and other government agencies and it's likely not the last.

More WHISTLEBLOWER News
In April 2008 a federal appeals court ruled that Tyson Foods must cease advertising its chicken as being free of antibiotics. That put a halt to its multimillion-dollar ad campaign. At the time, the company claimed that the ruling did not apply to its product labels, which were approved by the Department of Agriculture. And in June 2008 Tyson Foods settled with two competitors that both claimed they lost millions of dollars because the labels misled consumers into believing that Tyson's chicken was healthier than theirs.

Meanwhile Tyson was hit with another suit filed in the same court on behalf of customers accusing Tyson of consumer fraud, breach of express warranty, and unjust enrichment.

Posted by
marissa
on January 17, 2013
I will never buy from tyson again. People have no idea of the food they are eating. JOIN THE CAUSE. TAKEPART.COM/FOODINC
Posted by
Yesenia
on March 7, 2011
I believe Tyson Foods, although necessary for the high demand of food for chains like McDonalds, that although they say they get their food from Lopez Foods, if you do research Lopez Foods joined forces with Tyson Foods. So in reality McDonalds is getting their food from Tyson, who indeed sanitation is not their priority. There are videos from their trucks and you can see how they treat the chicken, etc. There are videos, proof of how Tyson grows their cows and chickens, by feeding corn to cows which makes them fatter quicker but creates a reaction in the cows stomach and develops the salmonella. They know all of this and yet they refuse to stop. Their poor chickens never see the light, they don't roam free like they portray, often times they can't even walk because they make them grow so fast their bones can't withstand the pressure of the weight. I think it's ridiculous. Can't we just go back to Farms where Food etiquette, quality really exists? I'm never going to buy from Tyson or McDonalds or anyone who has a relationship with Tyson or gets their foods from Tyson. The truth is out there. I'm sure people are smart enough to stop buying cheap products from Tyson.