The Whistleblower Protection Act, which forbids retaliation against employees who come forward with a legitimate concern, has recently come to the aid of a New Jersey whistleblower who was fired by his employer. The former employee will finally be paid back wages via the seizure of his former employer's car. 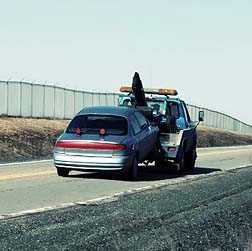 According to a December 30 release from US Fed News, an employee at Brocon Petroleum Inc. of New Jersey was fired after someone filed an anonymous complaint about safety practices at the worksite. Brocon suspected that the employee in question had contacted the US Department of Labor's Occupational Safety and Health Administration, triggering an inspection by OSHA officials.

In retaliation, Brocon fired the employee after the inspection.

An investigation by the OSHA Whistleblower Protection program found that Brocon had violated the whistleblower provisions of the Occupational Safety and Health Act. The Labor Department filed a lawsuit in March 2008 on behalf of the affected former employee.

A consent judgment filed in the US District Court for the District of New Jersey saw an agreement by Brocon to pay the plaintiff's back wages, as well as remove any reference to the suspension and discharge from the former employee's personnel file. The employer also agreed to provide a posting notifying all current employees of their whistleblower rights.

More WHISTLEBLOWER News
According to the US Fed News release, the employer failed to comply with the monetary aspect of the settlement, which amounted to $7,500 in back wages to be paid to the former employee of the firm.

US marshals accompanied by special agents from the US Department of Labor's Office of the Inspector General proceeded to the residence of Richard Kohler, identified as the president of Brocon Petroleum Inc., and seized a vehicle from his property on December 29.

"This action should send a clear message that there will be consequences for retaliating against employees who engage in activities protected by law," says Robert Kulick, OSHA's regional administrator in New York. "While OSHA is best known for ensuring the safety and health of employees, it is also a whistleblower protection agency."

It is assumed that the whistleblower no longer works for, or wishes to work for, Brocon.