A whistleblower who raised safety concerns with regard to intersecting runways in Newark, New Jersey, found himself banished from the control tower for a year. The law is on his side, however: the Whistleblower Act stipulates that an individual who speaks up about a legitimate concern cannot be subjected to undue retaliation. 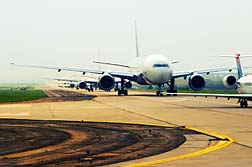 Newark Liberty International Airport is the gateway to the New York Metro area and is easily one of the nation's busiest airports. However, the simultaneous use of intersecting runways has repeatedly caused planes to fly too close to each other above the airport.

According to the US Department of Transportation (DOT) Inspector General, there have been at least four instances this year and four in 2008. On January 16 of last year, two Continental planes missed one another by about 600 feet, according to the DOT.

"That was very scary. I was there for that one personally in the control tower, and it scared the heck out of everybody up there," said Ray Adams, the Newark air traffic controller who blew the whistle on the problem.

There is potential for disaster when a plane needs to abort a landing, something that happens in about one of every 700 flights at Newark. The diverted plane is required to make a sharp right turn through the flight paths of other planes using the intersecting runways.

Adams first raised the issue with the Federal Aviation Administration (FAA) without success. When he took his concerns to congressional leaders in New Jersey, Adams told CNN that he was punished. The FAA counters that those actions had nothing to do with Adams' safety complaints.

More WHISTLEBLOWER News
Adams went on to file a whistleblower complaint with the US Office of Special Counsel, which investigated by way of the DOT and found merit in Adams' concerns. The FAA responded by announcing plans to implement new software in mid-December that would assist air traffic controllers at Newark in spacing planes. A spokesperson for the FAA cited issues with training and a need to liaise with other area airports before the software can be fully functional.

The matter has since gone all the way to the Oval Office. Last week the Office of Special Counsel issued a communiqué to President Obama that said, in part: "we found a substantial likelihood that FAA officials were engaging in conduct that constitutes gross mismanagement and a substantial and specific danger to public safety."

Meanwhile, Ray Adams is back at work and glad that something is being done.