Under Washington State Employment Laws, as well as various federal statutes, contractors are required to hold state registration and permits for the work contractors actually perform. According to a recent release by States News Service (10/6/12), the fourth in a series of unannounced sweeps since August by inspectors with the Department of Labor & Industries (L&I) found no fewer than 11 contractors falling outside the bounds of compliance. 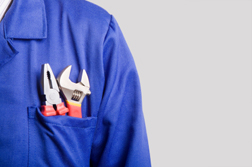 Such affronts to Washington employment regulations not only carry fines and penalties, they also present a risk to subcontractors and employees working for those contractors, as well as the consumers.

This is especially true in the renovation market, whereby homeowners will hire contractors to undertake renovations on their dwellings. And while it remains incumbent on the homeowner to ensure the contractor is duly qualified and has all the required documents and registration, a contractor can often misrepresent himself in defiance of Washington State Labor Law, putting both himself and the homeowner at risk.

"An unregistered contractor typically has no liability insurance, no bond, and pays no taxes or workers' comp," said Dean Simpson, manager of L&I's construction compliance program, in a statement. "That means they're leaving consumers unprotected and are unfairly competing with reputable contractors who do great work and meet the requirements."

Inspectors visited no fewer than 63 worksites in Chelan and Douglas counties in Washington state over one weekend and cited 11 contractors for infractions.

Such a blatant oversight can cost a consumer far more than the cost of a fine to the contractor. And not only does it paint all homebuilders and renovators with the same tainted brush, the disreputable contractors undercut legitimate operators and take business away from them. To that end, legitimate contractors remain concerned for their own bottom lines, their industry as a whole and the consumer who might have little leverage to reverse a problem caused by an unregistered Washington employment contractor.

More WASHINGTON EMPLOYMENT LAW News
"We continue to receive numerous calls from consumers who thought they were getting 'a great deal,' only to discover that they have little or no recourse when they're ultimately left in a lurch by these bad actors," said Mark Straub, executive officer for the North Central Home Builders Association, in a statement. The association, Straub maintains, "fully supports such efforts by L&I in rooting out unregistered contractors in North Central Washington."

Previous sweeps have found problems with plumber certifications and underage workers, which is not only a safety issue but also an affront to Washington state employee rights for the underage worker. Many contractors did not have permits to perform the work they were doing on behalf of the customer.

While such contractors can get themselves in hot water, the situation can be worse for the homeowner who has to deal with shoddy work from an unregistered contractor, or for work that did not carry the required permits.

Little wonder that many consumers resort to pursuing legal action with the help of Washington employment lawyers, in an effort to achieve some form of justice.