Vytorin Kidney Failure: "It's going to end my life soon."

Three years ago, Jim Wiley was taking Lipitor, a statin drug, for elevated cholesterol and tolerating it well. That was when Merck/Schering-Plough introduced Vytorin, a combination drug that contained their proprietary anti-cholesterol drug Zetia and the statin drug Zocor (simvastatin). That's also when things took a turn for the worse—much worse. 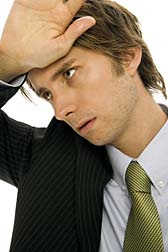 "After I started on Vytorin, I complained to my doctor that I was having double vision and getting light-headed two or three times a day. She sent me in for an MRI to see if I had a brain tumor, but it came up fine. After that, she said, 'I don't know what to tell you.' She didn't mention that this could be a side effect of the Vytorin.

Six months after starting on Vytorin, Wiley developed rhabdomyolysis, a known potential side effect. Rhabdomyolysis is a breakdown of muscle fiber that releases muscle fiber contents (myoglobin) into the bloodstream; when myoglobin is broken down by the kidneys it forms harmful compounds that can block the kidney structure and cause renal failure.

The early symptom of rhabdomyolysis is agonizing muscle pain. "At that time I didn't know what it was," Wiley says. "I could barely move—I'm a hair stylist, and one day I worked on two clients then had to call the rest and tell them, 'I have to cancel. I'm in so much pain I can barely move, and I don't know what's the matter.' That's when I went to the hospital for the first time.

"I took my medications with me to the ER. The ER doctor asked me, 'How long have you been taking Vytorin?' I said about six months. He said, "I think I know what's wrong." After my blood tests came back, he did a biopsy of my kidneys and said they were functioning at about 25 percent. I couldn't believe it; this had never happened before."

Wiley was hospitalized for two weeks while doctors waited for the rhabdomyolysis to subside. "My hematocrit kept going up and up to about 10.5 over the two weeks I was in the hospital" he says. "They were scared that I'd have to start dialysis right then, but eventually it dropped back to 2.7. I've had many flareups since then.

"In July 2006, I had three heart attacks at age 50 in about a four- or five-day period. The first one I didn't know about; I just happened be at the hospital for blood work and had the second heart attack right in front of the doctor. The third attack happened just before I underwent bypass surgery; I had three 90 percent blocked arteries, but they turned it into quintuple bypass surgery."

Since his surgery, Wiley has been hospitalized four or five times due to renal failure. "The last time it was two weeks; sometimes it's been nine days or four days. Right now my kidney function is at around 15 percent, and that's why they want me to do home dialysis. I have to decide whether to do it, and I don't think that I will. I don't want to live that way," he says.

"My doctor said I have maybe two years without dialysis, so that's what I'm looking at. I asked him how long I would have if I did dialysis, and he said, 'I just don't know; longer than two years, but I don't know how long, because your kidneys are so damaged.'

"I'm back at work now; I'm able to work except for the times when I'm in the hospital. I can manage except when my kidneys start acting up, which has happened four or five times in the past few years. I can't take statins any more and I wouldn't even if they said I could.

"I could have surgery in July and start home dialysis after that, but I've pretty much decided not to do it. I would have to do home dialysis four to nine times a day, and I don't want to live that way; it's hard enough living the way I do now, especially since they don't know how much longer than two years I would live. I don't want to go through that.

More News
Even without medication, Wiley's cholesterol, while elevated, was never at a critically dangerous level. "It was never much higher than it is now, around 210. They made it sound like 210 was really high, but I know now that it's not that bad," he says. That leads to the question: why was he prescribed Vytorin? "I don't know how much of what I've read about pharmaceutical companies and doctors and kickbacks and all is true, but I do believe that some of it is true.

Wiley contacted LawyersAndSettlements partly to seek legal advice, but equally just to get his story told. He says, "Maybe it will help some other people who have time to do something about it—I don't think I really do. That's why I agreed to do this interview. It all happened so suddenly, and it's going to end my life soon, so I wanted to get my story out there so it would help other people."