It was a little more than a year ago, in June of 2014, that a study published in JAMA Internal Medicine (6/14) found that men who use Viagra (sildenafil) were 84 percent more likely to be hit with a Viagra Skin Cancer Diagnosis within 10 years. That revelation succeeded in raising the ire and heart rate of many American males who rely on Viagra to reverse their symptoms of erectile dysfunction. 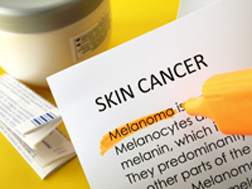 Researchers were careful to note that one study does not a conclusion make; more research had to be done.

A year later more research has indeed surfaced: a study described in the Huffington Post (6/24/15) as a “rigorous” analysis of more than 20,000 medical records.

The conclusion? Viagra does not cause sildenafil melanoma. Men suffering from erectile dysfunction who also enjoy a few minutes in the sun every now and again breathed a sigh of relief as the danger has passed.

Or has it? Any wholesale retirement of red flags over this issue might be premature. That’s because the latest study only determined that sildenafil does not cause or is unlikely to cause Viagra melanoma. The study did not debunk the potential for an association with melanoma, which the original study, published in JAMA Internal Medicine last year, first brought to light.

In fact, this latest study - more exhaustive than the first - tabled the conclusion that Viagra does not cause melanoma (skin cancer), while in the same breath admitting the conclusion over causation was in spite of the higher risk for the disease amongst users of Viagra and similar drugs, which help mitigate the symptoms of erectile dysfunction.

In other words, the original claim of a potential association as outlined in the original study published last year has not been ruled out.

This latest study on Viagra melanoma, undertaken by researchers at NYU Langone Medical Center and published late last month in the JAMA (Journal of the American Medical Association), noted that instances of Viagra Skin Cancer Diagnosis was more than likely associated with lifestyle issues: a supposition that men who have the ample disposable income required to maintain a stock of Viagra for erectile dysfunction (Viagra and other drugs that treat erectile dysfunction are expensive medications) can also afford more vacation time in exotic places and warmer climes, with a corresponding increased exposure to the sun’s rays while on the beach, for example.

Researchers at NYU also made the point that a “dose relationship” - in other words, a spike in melanoma risk that corresponds to a higher use of the drug in question - would typically be seen if the at-issue drug was a direct cause of skin cancer. This dose relationship was not seen.

“What our study results show is that groups of men who are more likely to get malignant melanoma include those with higher disposable incomes and education - men who likely can also afford more vacations in the sun - and who also have the means to buy erectile dysfunction medications, which are very expensive,” said Dr. Stacy Loeb, the lead investigator, in a written release.

More VIAGRA SKIN CANCER News
That said, a greater statistical risk for a Viagra Skin Cancer Diagnosis amongst men who regularly use sildenafil (Viagra) and other drugs designed to mitigate erectile dysfunction has not been ruled out. In fact, Loeb admitted as much in her statement, according to the Huffington Post report. That statistical risk is a 21 percent increased risk for having filled a single prescription.

Based upon the long-held mantra maintained by the US Food and Drug Administration (FDA) that a drug is considered safe if the benefits outweigh the risks for the intended constituency of patients, Viagra is safe - and, according to this latest research, does not cause Viagra melanoma.

However, the statistical risk and a potential association has yet to be ruled out. That’s good enough for any plaintiff with a Viagra lawsuit in the pipeline, alleging that Viagra had something to do with a diagnosis of skin cancer. Until there is more conclusive evidence to the contrary, the potential for an association is quite simply reason enough to carry on.

If you or a loved one have suffered losses in this case, please click the link below and your complaint will be sent to a drugs & medical lawyer who may evaluate your Viagra Skin Cancer claim at no cost or obligation.
Request Legal Help Now