Patients who go into Veterans' Affairs hospitals expect that they will receive proper care and that the problems they go in with will be treated. However, as Darren C. found out, sometimes what you come out with is far worse than what you went in with.

Back in 1985, Darren was diagnosed with a disease of the large colon. He suffered with problems such as ulcers and bleeding but had managed to keep the problem under control with steroids until 2006, when the steroids stopped working. Darren was given a different drug but had a bad reaction to it. So doctors gave him a choice: he could either continue with the steroids or have his colon removed.

"I had the disease for many years and the steroids were no longer working," Darren says. "I had an increased risk of cancer, so I decided to have the surgery. The VA in Dallas said they would be glad to do the surgery. I spoke to the surgeon and asked if they could only remove the portion of my intestine that was affected by the disease. He said that they could not because the disease would still be in the large intestine somewhere. Furthermore, after the first surgery, a second surgery could cause further problems, so they wanted to take everything out at once." 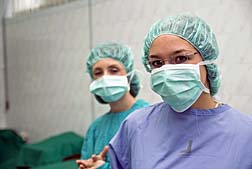 According to Darren, after the surgery was complete, he would have a hole in his side through which stool, in liquid form, would drip from his small intestine into a bag. He was meant to be out of the hospital within six to ten days following surgery. Unfortunately, things did not go as planned, and Darren spent almost three months in the hospital and required additional surgery.

Two weeks after his first surgery, nothing was coming out of the hole in Darren's side. He had a scar from his breastbone to his pubic area from the first surgery, which doctors opened again. It turned out that the muscle at the bottom of Darren's pelvis had not been sewn up properly, so part of his small bowel slipped through the muscle floor. Doctors had to move the small bowel back up and cut off seven millimeters that had been herniated. However, because of a "staple gun misfire," doctors wound up removing an additional seven millimeters.

"Following that second surgery, things were still not working. Nothing was coming out of the iliostemy. They thought that my small bowel had become paralyzed so nothing was coming out. I tried to eat food, but it would just sit in my stomach and then I would be vomiting all the time because there food had nowhere to go. I was dehydrated and caught a superbug and infections from the hospital. At one point they were feeding me through an IV.

"The kicker is that during the second operation, they damaged the nerves enough so that now I am impotent. They also damaged the nerve that causes the bladder to contract. I have to always carry a catheter and lubricant with me. I have to catheterize myself four times a day and I will have to for the rest of my life.

"Back in the hospital, things were not going well but they decided to try to send me home. I suddenly got really sick, with a fever of 103 and a heart rate of 155, so I went back to the ER. They did some tests and took a urine sample and sent me home. A different doctor called me and said I might have MRSA [Methicillin-resistant Staphylococcus aureus, a potentially fatal infection that can be picked up in hospitals and is resistant to antibiotics]. The next day I went back to the ER and started on IV antibiotics, which I was on for a few days."

Darren was sent home after that, but still had to use the antibiotic IV at home. However, his problems were not over. "Two days later, the hospital phones and says that I have to go in right away because there was a problem with my blood work. I was in kidney failure, using only 40% of my kidneys because of an antibiotic overdose. So, I was in the hospital for a few more days. Luckily, this was resolved, but I don't know if it will cause problems for me in the future."

More News
While he was in the care of the Dallas VA, Darren says he contracted four infections, including a bladder infection, fecal infection in his blood and MRSA. Furthermore, he has developed lifelong problems including impotence and inability to urinate. Darren says that his problems were the result of a lack of proper care while at the Dallas VA. "I had an infection and I should have been isolated. Instead, I was kept in a tiny room with four other people and a common bathroom. Because of problems with my surgery, I will have to catheterize myself for the rest of my life and I'm impotent. I'm only 53 years old."

Unfortunately, Darren is not the only person who has been harmed or injured by poor care while at a Veterans' Affairs medical center. Many former patients are now investigating the possibility of a lawsuit against the government for injuries sustained because of medical malpractice at the hands of VA staff.