"Because I'm a chef, I figured I would help feed people," says Sweitzer. "I was making an 'open kitchen' sign when a car skidded so I jumped out of the way and the circular saw I was holding cut into my left thumb. I got it stitched by triage and didn't think much more about it. 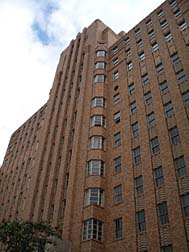 Last January I started to lose my grip so I went to the VA hospital where they tried several treatments: cortisone injections, wearing a brace and anti-inflammatory pills, but nothing worked. I was referred to the Philadelphia VA for surgery. I researched the surgeon online and his credentials were off the wall—a hand orthopedic surgeon at Penn University.

My first surgery was in November, 2006 but it didn't seem to work. The doctor had two choices and I believe he made the wrong choice. One choice was to stretch the shredded ligament and re-use it. The other choice was to take a tendon out of my wrist and use that to replace the broken tendon. He chose the former.

As it turns out, the surgeon I researched didn't perform the surgery. Instead, he was just 'in attendance'. And I think my surgeon was in a rush to get the next case. Apparently he attends five surgeries every Monday at this VA hospital and when I went into the OR, he was already behind schedule. I know this because I had to be there by 8am for 10am surgery but I didn't go into the pre-op room until almost 11am.

In June of this year, I went back to Philadelphia and decided to go with the bone fusion surgery. I got x-rays five weeks after surgery and the fusion didn't take - so far. Meanwhile I have been unemployed since November 2006. I had to apply for social security benefits. How am I expected to work as a chef with one hand? Now I have to go back to Philadelphia and have the cast removed and more x- rays October 1st. The surgeon told me that I could conceivably be out of work until July, 2008 because I have to learn to use my hand all over again."

Would Sweitzer's surgery have been successful if it was performed by the orthopedic surgeon and not a 'rookie'? Larry Hughes asks the same question...


Coarsegold, CA:Larry Hughes (not his real name) is a retired disabled vet. He recently had surgery on his left toe joint that was arthritic due to a childhood injury. "I went to the VA hospital to make it better but two surgeries later, it is worse," says Hughes.

"They cut my toe joint and used stainless steel screws and a plate to fuse the joint but it didn't work. I was in pain for a year so they took the screws out and tried to re-do it. But this 'newbie' doctor at the VA busted one of the screws at the head and I basically walked around for five years with a broken toe until I found a civilian doctor in November, 2006.

He took out the hardware—I kept the broken plate and screws—and installed an angled plate over the joint (the original plate was flat) and did a bone graft.

More News
This new plate was concave so it fit over the bone. The civilian doctor told me it will take time to be solid but feels better. Even though I had insurance, this surgery cost me $3,000. If I went back to the VA hospital it wouldn't have cost me financially but it would likely cost a few more years of misery. How many times does it take to get it done right?

My toe hobbled me—it created pain and misery for about five years and I don't think that is right. I am upset with the VA. When I asked my civilian physician how this mistake could have been made, he just said 'I don't know what the procedure was back then.' They won't blame another doctor. Obviously when a stainless steel screw is broken, it broke going in, not when it was taken out.

The VA hospitals are mainly teaching hospitals. I trusted them and didn't feel the need to research my surgeon. That might have been my mistake."

If you are a veteran and have suffered injuries or negligence at a VA hospital, please contact a lawyer involved in a possible [Veteran Medical Malpractice Lawsuit] who will review your case at no cost or obligation.
Request Legal Help Now