Sherry W. has been getting the run-around from her VA hospital, to the point where she is now considering a VA medical malpractice lawsuit. Meanwhile, her condition is worsening. "This is more than an inconvenience, even for my husband-- we haven't had sex in more than six months," says Sherry.

Sherry believes there are two reasons she is being denied proper medical attention: she is black and female. "We live in northern New York— a predominantly white area," she says. "I am not the only one who is being treated this way by the VA but most people won't speak up because they are afraid of getting even worse care. From what I have seen, there isn't much offered for a female veteran." 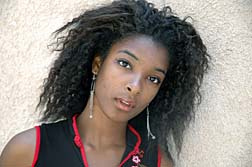 Sherry is getting increasingly concerned about her health and says she is slowly becoming paralyzed because she hasn't been treated for a ruptured disc and a nerve impinging on her neck and sciatic area.

"I was in the military for six years until an obese person fell on me—I was showing him how to get out of a vehicle when it rolls into a land mine (I was previously in Kuwait)," says Sherry. "He was in the National Guard and weighed about 300 lbs. I was honorably discharged due to my medical condition in March, 2004. A little over a year ago, I started to get numbness in the right side of my leg, then it was my entire right side and now it is affecting my left side.

I was then told to go to Samaritan Hospital in Watertown for an MRI and to see a neurosurgeon. But they just doped me up with shots for back pain and a herniated disc. The Syracuse VA would not release the MRI or other tests I had there to another hospital, even though I signed a medical release form.

I have now been to neurosurgery, pain management, even a psychiatrist. I have all of my medical records, everything that shows what should be done. My primary care doctor suggests surgery and all tests indicate that. But pain management sends me to primary care and then it goes back again—the never-ending circle.

Meanwhile, I have been away from my regular job since March 18th. I am not on disability because nobody seems to know what is going on with my medical condition and therefore I cannot apply.

It has now got to the point where I am having difficulty walking. If I put my entire foot on the ground and then my body weight follows, I get severe pain. As I explained to the VA doctor, I wake up at night and have to beat on my legs, massage them to get feeling back.

I finally raised so much hell that I got a good primary care provider. He also gave me the number of a congressman I can contact regarding the Syracuse VA hospital. He knows there is 'something going on' because he can't understand why I am being treated this way—meaning I am not getting treated. He has no problem speaking against the VA. 'I will likely get my ass chewed over this,' he said-- those were his exact words. He put a note in my medical report about being denied a bed at Syracuse. I know this because I get an updated copy of my medical records at the VA hospital.

My biggest concern is that I have a real fear of waking up one day completely paralyzed. I sleep on the couch downstairs because we have many flights of stairs at home. There are four stories to my house: the bathroom is up one flight; the next floor is my office.

More News
And my husband has to take time off work to take me to the doctor. I am trying to find a job that is flexible—there are times I can't work due to the meds and sometimes I can't even move. And I am taking sleeping pills. All the meds make me sleepy so I can't function. And they are highly addictive.

I really believe that the only reason they aren't helping me is because I am a black female. I have a friend in Arkansas—a white male—with a similar problem but he didn't even see active duty. His back problems aren't even as bad as mine but he gets top-notch care.

I want whatever it takes to fix the problem. I don't want money; I just want to go back to work and have the life I was used to. I want to play sports with my son; I want to be able to drive my sports car without pain."

Posted by
FemaleVet
on January 9, 2016
I am a 100% rated disabled Army veteran and you would think that would mean something with the VA in terms of pain management care. Nope, it doesn't. I have horrific chronic pain and have been maintained on the same level of meds for many years. The Austin VA doctor routinely threatens to cut me off or orders it late. If I was a male veteran I would probably be treated better and pain treated appropriately. I am also thinking about bringing a discrimination lawsuit. It is well documented and studied that women and especially black women get less care and pain controlled appropriately than men. Our pain is considered as in our head or we are just too sensitive. I finished basic training on a broken foot, including a 20 mile ruck march, so I wouldn't have to repeat it. Trust me, that sucked and very painful. I sucked it up and drove on. Sensitive my behind.
Posted by
Left for dead
on May 2, 2014
I'm a former soldier of 14 years, combat vet, enlisted then aviation warrant. I'm confident the Atlanta Veterans Affairs is openly discriminating against white, male soldiers. I have been mocked by their security teams on two occasions, I have made numerous trips to the VA office in an attempt to get records that are in their computers and every time they tell me the printer is broken, yet I see other service members getting files printed, the last time I went, the person at the help desk (a black male) told me "you won't get anything from us!", then he called security and they menacingly surrounded me and tried to intimidate me by acting like I was a violent person, then as I walked across the parking lot, I turned and they were high-five'ing each other and laughing at my back. A couple months later at an appointment with one of their doctors (an African lady) at one point in the interview she said "your not serious about suicide because if you were..." She didn't finish the comment but the look on her face told the rest of what she was thinking, then a few minutes later she said "you no longer have PTSD because if you did you would have committed crimes more frequently and of much greater severity." Then she lied and accused me of being an opiate addict which is completely false. After about 25 minutes I got up to leave and she asked if I have any questions. I said "based on your demeanor and line of questions, I know what's going on here." With that she said "we all have our orders don't we?". She subsequently recommended a reduction in benefits from 80% to around 20%. I didn't think much about all this until two weeks ago a doctor told me that she has been under investigation for racist comments and actions WHILE employed by the VA! But she is still there? The doctor went on to tell me he currently treats 8 to 10 other white males that she behaved this way with and that his office takes affirmative steps to ensure no white male soldiers go to her. That tells me it isn't just in my head. I would like to file a lawsuit at the federal level and expose what is going on at a national level if possible.
Posted by
Pia William
on October 3, 2013
I empathize with you ma'am I am having the same problems in Alanta at the VAMC. I fully concur that female veteran receive a lesser quality of medical care and when you add being African American to the equation it only duplicates the standard of care. I would love to converse with you. God Bless you for your courage. I am going to the media myself after being detained by police, harassed, and threatened after recording a doctor who was being verbally abusive during an ER visit. Silence is consent and I have had VA medical employees literally BEG me to "keep fighting because if you keep fighting you help US ALL!!!" Yet they have NO COURAGE THEMSELVES TO advocate when they have inside knowledge of acts of medical malpractice, medical neglect and patient abuse yet will NOT speak out. This type of knowledge unreported will and I am sure cost veteran loss of life or limb, but it's about preserving their employment versus doing what is right. Thanks for sharing once again.