Cause of Death: Veteran Medical Malpractice

"My husband needed the surgery because of deteriorating discs that were probably caused by the meds he took for hepatitis C," says Peggy. Her husband contracted hepatitis C when he was in the service—and noted in his medical records. 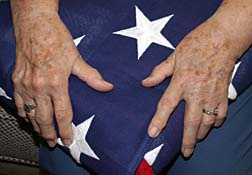 "A short time after surgery, he went back to the VA hospital for a follow-up exam and the doctor said he was okay," says Peggy, "but they never even looked at him." If they had, a sepsis may have been averted. Instead, he was just sent home, with an incision that had split open and was now infected.

"He got up one morning with a high fever—it was 103?F," Peggy explains. "Our doctor told me to bring him into the office. They took his temperature and sent him to the hospital immediately. Once there he was admitted but by this time he had double pneumonia - both lungs were infected. This hospital wasn't equipped to care for him but they couldn't find a bed in any other VA hospital. In the meantime they kept him overnight and cleaned up his incision. They tried all the next day to get him into a VA hospital; finally he was air-lifted to Scottsdale and I followed in the car.

More News
They kept him in Scottsdale for three days. He had to go through another surgery: they opened the wound and took out some plastic around a metal appliance that was used to fuse the discs. They had to put him in a special bed and move him continually - because of the pneumonia. He was there until a bed became available in the Tuscon VA - where he had the surgery originally.

He spent three months at that hospital—although some of that time was rehab. They asked him at that time if he wanted to sue the doctor who did the back surgery, but he said NO! Obviously he wasn't in his right mind.

He came home and was on the mend. But last March he felt sick again. I took him down to the VA hospital and they kept him overnight. The next day he died; the coroner wrote that he died from septic shock and pneumonia. And I am still in shock."

If you are a veteran and have suffered injuries or negligence at a VA hospital, please contact a lawyer involved in a possible [Veteran Medical Malpractice Lawsuit] who will review your case at no cost or obligation.
Request Legal Help Now