It's Buyer Beware with Variable Annuities

Marjorie S. (not her real name) thought she was clear with her stockbroker when she said she wanted the safest investments possible; she did not expect that her money would be put in something as unsafe as variable annuities. Like many people with money in variable annuity investments, Marjorie has learned that the money is now locked in, and there is nothing she can do about it. 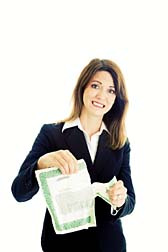 Marjorie had been in the stock market with Smith Barney for more than 9 years when she decided to pull her money. In those 9 years, her account dropped from $45,000 to $17,460. Marjorie decided she had enough of losing her money and wanted it pulled from the stock market.

"I am very naive in investments. I told the broker that I wanted to keep the little bit of money I had left and I said that I wanted the safest thing he could put my money in. He suggested an annuity and told me it was very safe; it was tied to mutual funds and it was the safest thing for someone my age, which at this point was now 61 years old.

"The broker said that he thought an annuity was the way for me to go. He spoke to my husband about our various accounts and suggested that we take all of our funds and put them in an annuity. My husband didn't fall for that, thank God. But my husband did say that if I wanted to put my $17,000 with the annuity that would be great.

"The broker left stuff out when he talked about annuities. I didn't know about all the annuities, the variable annuities and indexed annuities. I said to him, 'I want you to promise me that I will be okay.' He guaranteed it but kept suggesting we put all our money in. We wound up putting in $16,000 [by the time the money was transferred, Marjorie's account had dropped from $17,460 to around $16,000].

"I got the paperwork that showed the transfer. Then I got more paperwork that showed the account was dropping. Within 3 months it went from $16,000 to $10,550. I was livid. I called the branch manager of Smith Barney and told him I felt they were not upfront about the annuity. My preference was to keep my money safe and not take any chances. I felt that the broker didn't explain the fees thoroughly enough. He was not thorough in that we knew nothing about annuities; we were like prey to him. I told him I was a novice; that I don't understand investing, and I just want to protect what I have left.

"My money is still in the variable annuity because I can't get it out. I've called MetLife and I do have a complaint in right now, but if I don't get some decent results, I will send a letter to SEC, the head of Smith Barney and FINRA. I don't feel that I was handled correctly.

"I found out that for a person my age a variable annuity is probably not the smartest way to go. The broker didn't tell us about the risk—this is where I feel I've been wronged. I was so specific about not taking any more chances with my money. I wanted that money protected. I wanted conservative accounts. How much clearer can you be with a broker? He put my money in something that I think benefited him for a commission—that's what I feel. He went against my wishes.

More VARIABLE ANNUITIES News
"The broker asked if I needed the money, right now and I said, 'No. I want it saved.' I worked hard for that money. I don't mind it being locked up for a few years, but I did mind that it was tied to the stock market, which I specifically said I did not want. I could have left it in the stock market and lost it myself.

"I'm so very passionate because I just feel that they were not really above board. This is all hindsight for me and I feel like an idiot. Before you do anything, get online and start investigating. That's where we went wrong. This was a real big eye opener to me. I pray that other people, if they hear the word annuity, start researching. I did find out that annuities are more for long-term retirement. They are better for younger people, not somebody who is ready to retire. It really is buyer beware."