Kathryn S (not her real name), put a lot of money into variable annuities a year ago. Unfortunately, since she invested the money, she has lost a lot of it. She says her money is locked into the variable annuities, leaving her with no choice but to ride it out.

"My original investment was $182,000," Kathryn says. "The last time I looked it was down to $89,000. It's probably partially my fault—I was not used to annuities. I've had stocks and mutual funds for years and handled my own accounts. I was afraid of stockbrokers because of their high fees and I was very successful for many years. 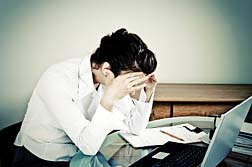 "There are 2 parts to the annuity: the principle and the cash value. They told me the cash value part could go down. My impression was that I could not lose my principle.

"This is unbelievable. I can't believe this is happening in my life. Why they [regulators] haven't said variable annuities are against the law, I don't know. They're a terrible product—they are not transparent and the costs are hidden. We are in an age where things are supposed to be transparent but the variable annuities are not. They told me that I would pay 2.35 percent, which I thought was horrible but since the investment would not decline, it would be worth it. But, the fees were really 3.35 percent and once you sign on the dotted line you cannot get out.

"If I tried to get out of the annuity, I would say 'good-bye' to the entire investment. If I get out, I get my $89,000 but no income stream. The idea of it every getting back to $200,000…it'll take forever and may never happen. So, I'll pay these creeps 3.35 percent for as long as I have the account. I can't even say, 'Let's cut back here because I need this,' because the investment is locked in.

"On top of that, they were offering at least 7 percent a year, but if you take any money out of the account at all, you don't get that 7 percent. That 7 percent is the only good thing about the deal. From day 1, they encouraged me to take money out so they don't have to pay me the 7 percent. I won't do it.

"The commissions are 10 to 12 percent of the principle. All they [the brokers] are after is the huge commission. They don't care who they step on or how broke you are. They are dishonest.

More VARIABLE ANNUITY News
"I just don't think this is a good product. If I'm in this kind of fix, I am sure there are many other people who have been taken in as well. My life has completely flip-flopped because of this. It makes me want to throw up when I think about it. As far as I'm concerned, this annuity is a license to steal. I can't believe it is legal. As far as I can see it should be illegal—with so many terrible stories out there, I don't know how they can do this. It is a very sad scenario.

"I invested almost $200,000, my life savings. They have lost over 50 percent of that money…I will probably never get my principle back. My contract ends in 3 years, but I can't leave this company because all I have left is their promise to pay me 5 percent of my $200,000, plus 7 percent. My cash portion is only 40 percent of the original amount and the stock market may go down further."