Ida L. is furious at the financial advisor who put her money into variable annuities. Like many people whose money was put into variable annuity insurance products, Ida says the investment was not suitable for her, given her financial situation and her physical health. However, even though the financial advisor has not given her a contract for her investments, Ida is having a hard time getting her money back. 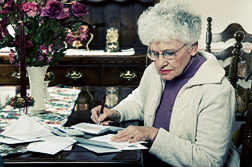 Ida initially made the investment in April 2008. She had been widowed 6 months earlier and was planning on moving from Washington State to Florida. She says she wanted to sell her house and buy a new one in Florida. However, when she applied for a loan for a home in Florida, Ida was turned down because her money, which was now in annuities, was not considered liquid.

"I was told that I could lose that money any day—it wasn't safe," Ida says. "When it was in the savings account it was safe and it was making a good amount of interest, but when it was put in the annuities it wasn't considered liquid."

Ida says that she feels her money was put in the annuities not because it was a good investment for her but because of the commission the financial advisor would make on the investment. Although Ida says she is not positive how much commission he made, she was told by other financial advisors that it would have been $22,000—a lot of money for an unsuitable investment, especially since Ida lost money in the annuity.

"I lost $2,000," Ida says. "He [the financial advisor] told me that it was because something happened and he didn't move my money quickly enough. So, what is he getting paid for? He also told me that every month a certain percentage would go to securing my money so I wouldn't lose any. So, why did I lose that $2,000?

"If I had left my money where it was [with USAA] I wouldn't have lost any and I'd still be getting interest. Now, the money is stuck in the annuity and it's there until I'm 59 ½ years old and I can't use it without losing 10 percent. He keeps telling me that I'm wrong about that, but other financial advisors tell me he's crazy—it's 10 percent if I take it out early.

"I've never received a contract for this investment, so I can't read about it. The financial advisor says he mailed it to me, but you don't just put something like that in the mail and not get a signed receipt for it. I asked him about the signed receipt and he says he doesn't have one—that's because I never got the contract.

"This has affected me big time. I'm now paying rent in a crummy condo in Florida when I should own my own house. I'm paying rent that I shouldn't be paying. One of my annuities gives me $1,000 a month. That's $1,000 a month of my own money, as if I'm a little kid and they're giving me an allowance. The financial advisor tells me the annuity is good because it's tax-free, but why is he concerned about tax-free accounts when I don't have an income?"

In all, Ida invested $358,000 with the financial advisor. She says she has been fighting since August to see her contract but so far has not received one. Furthermore, she was not given a 10-day freelook, which other financial advisors tell her she should have had.

More VARIABLE ANNUITY News
"This financial advisor has messed up my life," Ida says. "My husband and I did everything we could to keep that money safe and this man took my money because of his commission. If he had been honest, he would have told me the same thing as USAA told me: that my money was safe and I should have left it where it was.

"I told him that I have heart problems and other medical problems. By the time I will be 59 ½ years old, I might not be here. Why take my money and put it away when I might not be around to use it?

"My advice to people is to not just trust a financial advisor. Get a second or third opinion. Don't just accept what the first person tells you, especially if you're vulnerable. I'm so angry to be where I am today: renting a crummy condo when I was supposed to be in a house. I'm furious. I'm really angry about this."