Variable Annuities Might Be Unsuitable for Some Elderly Investors 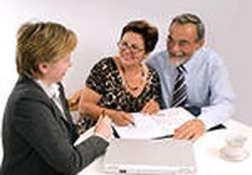 According to the New York Times (7/12/13), some insurance companies that offered extravagant income or death benefits have found that with low interest rates, it’s more difficult to meet the guaranteed returns. To stem the financial problems, companies have asked investors to either be bought out or to switch to an investment that has lower returns. Clients that do not agree to either a buyout or a different investment could lose their guaranteed income.

Many people who are at or approaching retirement age consider putting their money in a variable annuity because of the guaranteed income and because they are sold as being relatively safe. One of the situations in which people buy a variable annuity is when their pension is paid out in a lump sum, rather than a monthly payment. Taking the money as a lump sum has its benefits in that administrative costs are generally avoided and the employee can do what he or she likes with the money, such as invest it. In some cases, that lump sum is then put into a variable annuity without considering the additional fees and the risk if the company cannot meet its annuity obligations.

More VARIABLE ANNUITY News
In fact, variable annuities can have high fees attached and may not offer the tax shelter that investors think they do. Whatever tax shelter they do offer might just be eaten up in fees and commissions. And for people who are counting on their variable annuity to get them through retirement, losing that money or finding out the company offering the annuity cannot meet its obligations can be financially devastating, especially when they were promised that the annuity was safe and had no idea about the risks involved.

At issue, according to some experts, is that the companies that offer the annuities - insurance companies - have made promises about benefits that they cannot meet.

In some cases, lawsuits or FINRA arbitrations can be filed against companies that have made promises about the safety and security of variable annuities without the assets to back those promises up.

Click to learn more about LawyersandSettlements.com
LawyersandSettlements.com is an online news and information site for the general public and legal community. As a legal news resource, we have emerged as an independent & trusted voice. We provide detailed and quality information on various lawsuits filed including Financial Cases, Immigration Cases, and Securities Fraud Cases.