Despite the fact that women have served alongside men in times of conflict (most in support roles, or serving as nurses and doctors), it is generally assumed that only the men come back with Veterans PTSD. However, women who enlist and serve in the military are just as apt to return with va ptsd, as the men. 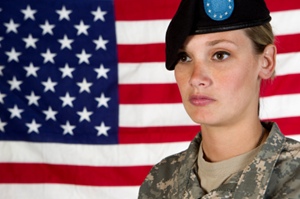 The Arizona Republic recently reported on two women who both served with the Phoenix Army and both came home suffering from nightmares, migraine headaches, insomnia, fear of crowds and panic attacks—classic symptoms of post-traumatic stress disorder veterans.

However, while Brittany Hodge, age 24, was able to identify a particular incident as the basis for her PTSD and was successfully treated, Sabrina O'Connell had a different story. She was not able to pinpoint the source for her PTSD, she was not properly diagnosed and therefore denied the treatment she sorely needed. At 41, she is reported to remain crippled by anxiety.

Also playing a part in O'Connell's denial for PTSD treatment was the unhappy fact that her service records had been lost.

A recent change in policy, however, should benefit O'Connell and others like her. Unlike previous protocol, any veteran can now ask for and receive screening for PTSD. If there are any symptoms of Veterans PTSD apparent, The Department of Veteran's Affairs (The VA) will automatically assume that the symptoms are caused by some traumatic event while serving, and therefore qualify the veteran for ptsd treatment.

Previously, a veteran exhibiting symptoms of post-traumatic stress disorder was required to document the source of the trauma, in order to qualify for treatment.

More VETERANS PTSD News
The updated policy is expected to benefit women, given their support roles in war. Combat stress is not confined to just the front lines.

"People always think about the guys," O'Connell said, in comments published November 9th in the Arizona Republic. "They think women are just in the back. But even though I was a supply clerk, I was at war, right up there handling things with the guys. We all had our M16s and our chemical masks with us at all times."

Last year about 319,000 veterans nationally received PTSD treatment, including counseling and medication, according to VA statistics. An estimated 20 percent of all women and eight percent of all men develop PTSD at some point during military service, the VA says. The change in policy should help more servicemen and women qualify for veterans disability benefits.
READ ABOUT VETERANS PTSD LAWSUITS

If you or a loved one have suffered losses in this case, please click the link below and your complaint will be sent to a civil & human rights lawyer who may evaluate your Veterans PTSD claim at no cost or obligation.
Request Legal Help Now

Posted by
Being in Him
on November 20, 2010
I have a series of Christian relaxation CD's that have helped thousands of people. 'Relaxation God's Way' is used by professional psychologists world wide. I hope they will help your viewers too; beinginhim.net