In Time for Christmas, an Olive Branch from the VA

A specific sector of veterans and their families who carry various maladies and illness from their time of service got an early Christmas present this year in the form of federal approval for VA benefits. Still to be determined are when those benefits will begin to actually flow, and whether VA disability benefits will be extended for other groups of veterans who have been shut out completely, or have been made to wait through a series of denials and delays measured in years. 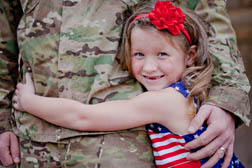 That said, for the victims of contaminated water at the US Marine Corps Base at Camp Lejeune, the announcement for presumption of service connection and expanded benefits comes in the wake of difficulty pursuing the same through the courts.

Camp Lejeune was located in North Carolina and was inhabited by US service personnel and their families beginning in 1953. Various ailments and examples of ill health have been traced to nearby tanks that stored industrial solvents such as perchloroethylene, trichloroethylene, vinyl chloride and benzene, suspected of leaking from the tanks into the camp water supply.

The contamination was discovered in 1982, with Camp Lejeune given the designation of a Superfund site by the US Environmental Protection Agency in 1989.

That legislation was the Honoring America’s Veterans and Caring for Camp Lejeune Families Act (The Act), a bill that identified 15 illnesses and conditions. The Act promised veteran benefits to service personnel and their families having served at the base for at least 30 days within the time frame covered by The Act - specifically 1953 through 1987.

That was in 2012. Three years later, 2015 is about to close with a further olive branch extended by the VA (veteran affairs) in the form of a presumption of service connection and benefits eligibility, announced this month. The proposal - governing regulations for which are still in the works - would also extend benefits eligibility to reservists and National Guard personnel who may have also served at Camp Lejeune during the period in question.

Under the VA disability benefits proposal, a presumption of service would be extended for eligible service personnel and family members diagnosed with non-Hodgkin’s lymphoma, leukemia, multiple myeloma, scleroderma, Parkinson's disease, and aplastic anemia and myelodysplastic syndromes, kidney and liver cancer.

While there won’t be an immediate benefit - there never is - the announcement nonetheless is good news for affected service personnel and plaintiffs having fought for disabled veteran’s benefits through the courts since 1982, when the contamination was first discovered.

The courts, at least with this portfolio, have not been kind. In January of this
year, the Eleventh Circuit refused to consider a panel ruling that put the brakes on multidistrict litigation against the US government.

More VA DISABILITY News
According to the VA, regulations required to establish the new presumptions are yet to be finalized. When that will happen, has not been identified. As a result, the VA says it will not be in a position to grant any benefits claims for the new presumptions until the rules are set. Nonetheless, the VA is suggesting eligible claimants come forward anyway.

In the meantime, it will remain to be seen if benefits resulting from this most recent announcement, and the Honoring America’s Veterans and Caring for Camp Lejeune Families Act of 2012 will flow expeditiously, or wind up caught in the abyss of delay and denial that is so common in the pursuit of veteran benefits.

Posted by
willie copeland
on December 21, 2015
I'm 51yrs old, I'm a dbl amputee, total care patient, in nursing home with kidney disease and a host of other problems. Still waiting on claim in appeal.