On July 1, the NFL announced that it had fined the Washington Football Team $10 million plus fees and expenses incurred in the investigation of allegations of sexual harassment by female employees. The conclusions of the investigation have not been publicly released, and efforts to keep the underlying allegations secret have sparked more lawsuits. The team and individuals who worked in front office seem desperate to bury the evidence, which is curious given the already thorough public reporting of sexual harassment and an atmosphere of bullying and intimidation. Activists have sought public release of the results of the investigation. In 2018 Houston Texans cheerleaders made unpaid wages claims. Is this part of the story, or is there evidence of something else? 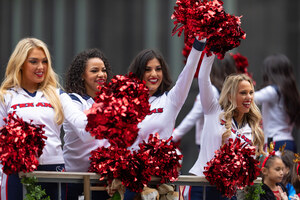 What may have begun as a legitimate effort to protect the privacy of the parties involved now smells distinctly like a cover up. Something doesn’t make sense. As they say, “It’s not the crime, it’s the cover up that gets you.”


In July and August  2020, The Washington Post published lengthy articles that detailed the verbal abuse and  sexual harassment to which female employees at the Washington Football Team (formerly, Redskins) were subjected. It was pervasive, affecting executive staff and cheerleaders, and it appears to have escalated, on occasion, towards sexual assault.

“’I was propositioned basically every day at training camp,” reported one female employee who worked for the team in the mid-2010s. Butt-squeezing seems to have been a common thing. Further, there appears to have been no Human Resources Department and no process for reporting harassment. Many of the women were very young and vulnerable – teenagers or just on to their first job. They brushed it off.

Some of the most disturbing reports concern mistreatment of cheerleaders at swimsuit calendar photo shoots, where they were economically incentivized to pose topless or in body paint. The racier the photo, the more likely the woman was to be featured in a “calendar month” picture. Cheerleaders were obligated to sell calendars, like Girl Scouts with cookies. Calendar girls sold more calendars.

In 2018, The New York Times described a 2013 photoshoot in Costa Rica during which Redskins officials collected cheerleaders’ passports on arrival at the resort. Some were assigned to act as personal escorts for guests and sponsors who were reportedly offered “up-close access” to the women. The women had no opportunity to decline. At some parties, male guests reportedly squirted liquor down the women’s throats with a turkey baster.

“Their participation did not involve sex, the cheerleaders said, but they felt as if the arrangement amounted to ‘pimping us out.’ What bothered them was their team director’s demand that they go as sex symbols to please male sponsors.” Another perspective might describe this as “soft trafficking.”

Clean up turns to cover up


In July 2020, following this reporting, the team fired several members of the executive staff and permitted others to retire. It then hired attorney Beth Wilkinson and her firm Wilkinson Stekloff, LLP to conduct an investigation of the sexual harassment allegations. Among other clients, Wilkinson and her firm have represented Brett Kavanaugh against sexual assault allegations by Christine Blasey Ford. The team was to supervise the investigation and determined early on that no written report would be produced.

The NFL took over supervision of the investigation in September 2020. In late December 2020, Wilkinson’s firm discovered that in 2009 the Redskins paid a female former employee $1.6 million as part of a confidential settlement. The settlement was struck after the woman reportedly accused team owner Dan Snyder of sexual misconduct.

More UNPAID WAGES News
David Donovan, who served as the team’s general counsel from 2005 to 2011, has since left the team to retire as a partner at Wilmer Hale, a Washington law firm. Donovan unsuccessfully sued Wilkinson to stop her from disclosing information pertaining to the 2009 settlement. Donovan was a party.  In the lawsuit against Wilkinson, Donovan sought to keep private all court records, including any public notice.


Team owner, Dan Snyder has accepted responsibility for workplace culture and has stepped away from management of day-to-day operations, relinquishing them to his wife Tanya Snyder. Tanya Snyder has not previously been involved in management of the team. She seems to have been previously involved in charitable work. She was named as co-CEO in the days before Dan Snyder stepped away. Dan Snyder now appears to own 100 percent of the Washington Football Team after years of wrangling with minority shareholders.