Egress and Regress, Donning and Doffing: Employees Working Off the Clock

Egress and regress, donning and doffing, these are all words that seem a throwback to the olden days, but as far as they relate to work, they are still very relevant. All refer to ways in which employees can be forced to work extra hours preparing for work but are not being paid for their time. Egress and regress lawsuits, and donning and doffing lawsuits allege unpaid wages and off-the-clock work for employees. 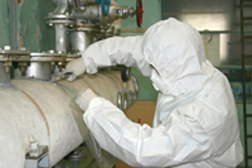 Basically, egress, regress, donning and doffing as they apply to employment have to do with duties that are considered vital for work but that employees are not necessarily paid for. Egress and regress refer to work duties such as logging into computer systems, setting up files and retrieving company tools before starting work. Although employees are often required to be fully set up to start their shift, they are often not paid for the time before their shift that is spent in these preparations. Nor are they often paid for the time spent after their shift shutting down programs, or the time on their breaks that it takes to log in to or out of various computer systems.

More UNPAID WAGES News
Donning and doffing refer to the putting on and taking off of required safety gear and/or uniforms (including costumes) before work, after work and during breaks. In some situations, safety gear can take five to 10 minutes to put on. Not a lot of time in one go, but over the course of a shift, that five to 10 minutes can add up to 30 to 40 minutes of unpaid work time, which can add up to a lot over the course of a pay period.

And although one may argue that by taking a job the employee agrees to the extra time it takes to prepare for a shift, it can also be argued that the company benefits from employees taking that time, and if the duties being performed are vital to the employee’s job, the employee should be paid for that time.

One lawsuit, which will be heard by the Supreme Court, argues that under the Fair Labor Standards Act (FLSA), employees must be paid from the moment they first engage in a principal activity that is required by the job.