We’ve all heard of companies that refused to pay their employees for time spent putting on or taking off uniforms, and companies that faced unpaid wages lawsuits for time employees spent in security checks. But what about lawsuits where the employer is alleged to have forced employees to clock out to go to the bathroom? Those are the allegations faced by a publishing company that was recently told to pay $1.75 million for denying employees their pay when they got up to use the bathroom. 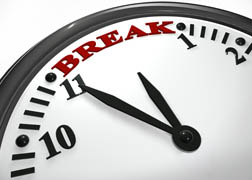 According to the US Department of Labor (1/4/16), American Future Systems Inc (doing business as Progressive Business Publications) faced a lawsuit filed by the US Labor Department alleging the company violated the Fair Labor Standards Act (FLSA) because its policy of employees clocking out to go to the bathroom dropped them below minimum wage. More than 6,000 employees in 14 call centers throughout Pennsylvania, New Jersey and Ohio are believed to have been affected by the decision.

“For far too long, American Future Systems penalized its employees for taking breaks to meet the most basic needs during the work day - stretching their legs, getting a glass of water or just using the bathroom,” said Jim Cain, district director for the Department of Labor’s Wage and Hour Division. “The judge’s decision reaffirms how clear the FLSA is about short breaks being compensable, and goes a long way in making these employees whole by awarding liquidated damages.”

More UNPAID WAGES News
The Department of Labor filed the lawsuit after an investigation uncovered practices requiring telemarketers for American Future Systems to log out of their computer when they left their station for every break, even if that break was only two or three minutes. That time was then deducted from their total hours worked.

Despite warnings from the Department of Labor that the practice violated the FLSA, the company did not change its policies. Although the FLSA does not require employers to provide lunch or coffee breaks, short breaks of between five and 20 minutes are considered compensable work time. Non-exempt employees must be paid at least $7.25 per hour under the FLSA for all time worked.

A federal judge agreed with the Department of Labor and ruled that American Future Systems and its owner, Edward Satell, must pay back wages and liquidated damages.