An Unpaid Wages lawsuit filed against an ambulance firm accuses the defendant of various infractions, including requiring workers to perform duties off the clock and rounding down work hours. Such conduct, if proven as alleged, can affect overtime hours computation as well as cut into an employee’s personal time, while effectively providing an employer services for free, in the absence of compensation. 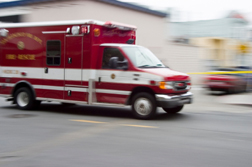 Employees are becoming increasingly vigilant with regard to fair pay for fair work - and the apparent escalation of instances where an employer appears to take advantage of an employee or group of employees often leading to an unpaid wages claim.

This latest litigation has been filed as a class-action lawsuit, meaning that other plaintiffs with similar issues can join provided the lawsuit is properly granted class-action status.

In a report published in The Post-Crescent (11/9/13), a paramedic working for the defendant since 2006 alleges that his employer violates various federal and state statutes. According to plaintiff Alan Frank, Gold Cross requires its paramedics to inspect and re-stock ambulances as well as receive shift reports prior to the start of their scheduled shift. This amounts to about 10 or 15 minutes per day, and can add up to an hour or more for the week.

Gold Cross is also accused in the off-the-clock-work lawsuit filed by the plaintiff’s unpaid wages attorney of improperly maintaining hourly records and rounding down time punches to the employer’s advantage. As an example cited by The Post-Crescent, an employee can clock out somewhere between 4 p.m. and 4:14 p.m. The employer can then round down to 4 p.m. and pay the employer accordingly - even if the employee actually worked until 4:13, effectively robbing the employee of 13 minutes of work time for which the employee should be paid.

The plaintiff’s unpaid wages attorney indicated in the published report that an employer can round down at the beginning or end of a shift - but not both.

More UNPAID WAGES News
The report cited an amendment to the Fair Labor Standards Act, as amended in 1947, requiring an employee to be paid for any work performed inside the workplace. In addition, the report suggests that the Wisconsin Department of Workplace Development also mandates that employees are to be paid for all required work pursued for the employer’s benefit.

The plaintiff claims that such an accumulation of off-the-clock work could affect an employee’s qualification for overtime pay. The defendant responded with a statement that Gold Cross remains in compliance with all state and federal wage allowances and rules.