The passenger van involved in a tragic accident in Bathurst, New Brunswick has long been banned from transportation of public school students in most of the United States and some Canadian provinces. The design of the 15-seat Ford Club Wagon made it dangerously susceptible to personal injury for passengers and drivers.

In the New Brunswick accident, seven members of a high school basketball team and one adult passenger died on Saturday, January 12, when the Ford Club Wagon in which they were traveling fishtailed and struck an oncoming tractor-trailer.

Similar accidents in the United States led to many personal injury lawsuits; in 2005, Congress prohibited the sale of 15-passenger vans to transport public school children to and from school. The vehicles can still be used for extracurricular activities and by private schools, churches, and universities, however. 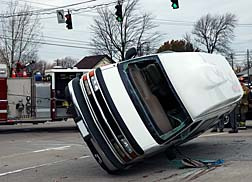 According to the consumer advocacy organization Public Citizen, "Originally manufactured as cargo vans, automakers never redesigned these vehicles to safely transport people. When five or more passengers are riding in these vans, the likelihood of rollover increases dramatically. Because the rear of these vans extend 4 to 5 1/2 feet beyond the rear wheels, any loading of five or more people or luggage/equipment causes instability during emergency maneuvers such as sudden turns to avoid a pedestrian or vehicle. This causes the vans to fishtail, and because they are top heavy and overloaded in the rear, they are prone to roll over and result in devastating crashes."

More TRUCK ACCIDENT News
The Washington, DC consumer advocacy group Safety Forum, starkly describes the Ford Club Wagon as "a death trap on wheels". Like many SUVs, it has a dangerously high center of gravity that becomes worse with increased passenger and cargo load.

The New Brunswick van did almost exactly what Public Citizen describes—it fishtailed out of control and was struck broadside by the tractor-trailer. Vans of this type are banned from transporting schoolchildren in several Canadian provinces including Nova Scotia, which borders New Brunswick. New Brunswick, however, has no restrictions on their use.

According to Public Citizen, retrofitting vans of this type with dual rear wheels significantly improves stability and handling. They say that the fix can be done for $300-$400 per vehicle. However, they add, "A long-term solution is also essential—the vans must be redesigned to protect passengers in rollover and side impact crashes, and to comply with school bus and other federal safety standards."