Every parent's worst nightmare just came true for seven families in New Brunswick. While traveling in a Bathurst High School van on their way home from a basketball game, seven players were killed, along with one adult (the wife of the van driver) when he lost control of the vehicle and crashed into a tractor-trailer.

The van was just minutes away from its destination—a local McDonalds Restaurant where parents were anxiously awaiting the return of the kids. Instead of seeing the van pull in, parents watched as police arrived and directed them to the hospital were they were then told which seven male students aged 15 to 18, and which adult, had died. The eight people were pronounced dead at the scene.

The collision happened on Highway 11 near Route 8 just after midnight Saturday January 12th. A light storm left the roads snow-covered and slushy. A police officer had been travelling from Tracadie-Sheila toward Bathurst when he noticed a tractor-trailer off the road. It was just after that when he found bodies of the students strewn all around, having been ejected from the van. Three rows of seats from the van had been ripped away and seatbelts torn off. 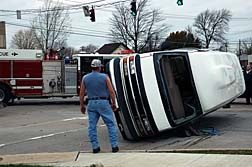 Bathurst High School has about 800 students. Grief counsellors were available Saturday for students.

Four people survived the crash. Three remain in the Chaleur Regional Hospital; one in critical condition, two in stable condition; and one has already been released. The driver of the commercial transport vehicle was not injured. No names have been released yet.

More TRUCK ACCIDENT News
In a news interview, Emily Cleland, sister of one of the victims, said her family is doing the best they can, trying to work their way through it. She learned of the accident around 2 a.m. Saturday. She describes her younger brother as an amazing person, her best friend her whole life.

"He was so charismatic. People were just drawn to him. You know, he was a really great guy."

She said a lot of his friends were with him on the bus and everyone is pretty much still in shock, and she is trying to cope with losing her best friend. She said that living in such a small, tight-knit community amplifies the loss.