The trouble with car truck accidents is that when a semi tangles with a car or a van, you know which is going to lose. Jerome F. Daly's widow lost her husband just a little over two years ago, in November of 2005, after a tractor-trailer loaded with lime flipped over onto its side and slammed into the van driven by the 45-year-old Kingfield resident.

As is often the case, the driver in the semi truck accident walks away. In this instance, Laval, Quebec resident Andre Pelletier, 43, escaped with minor injuries, while the driver of the van died at the scene from massive internal trauma.

Apart from the indescribable disaster that emanates from truck accidents, the human cost is what personifies the tragedy.

In this case, Jerome Daly was a successful businessman who sold a going concern in Massachusetts in order to move his wife and three young children to Kingfield, to provide for them a better quality of life. They found it there, and the family became heavily involved in the community. 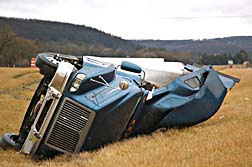 Now, the community has lost a valued citizen to a truck accident. A wife has lost her partner, and three children have lost their father to the driver of a big rig that is alleged to have been traveling too fast in an allegedly unsafe vehicle.

Police at the scene of the crash in 2005 stated that it appeared Pelletier was trying to negotiate a corner with a full load. He swerved into the oncoming lane while attempting to correct the truck, but instead the truck flipped onto its side and careened along the highway, slamming into Daly's van. Daly tried to avoid the accident, but police said there was nowhere to go.

Daly's widow Jane has launched a lawsuit against Pelletier, as well as the truck driver's employers: L. Breton Transport, Malo Transport, and Transport Chalut, all of Quebec.
Her motivation with her lawsuit is to foster change, in an effort to get unsafe vehicles off the road, to afford safer highways for Maine citizens, and to avoid car truck accidents.

Area residents have long complained about Breton and Malo trucks hauling lime from Canada, and take issue with the fact they are allowed to cross into Maine at Coburn Gore, which is not a commercial entry point.

The stretch of Route 16 where Daly was killed features a series of 'S' bends about one and one-half miles from the Kingfield town line in New Portland, Maine. Daly's lawsuit alleges, "The truck was carrying a lot of weight and the driver was trying to negotiate some very aggressive turns," says Daly's lawyer. "He was proceeding in a way where he was unable to control that vehicle," thereby causing semi truck accident.

Jane Daly will have help from area legislators, as well as US Senators Susan Collins and Olympia Snowe, who have sent communiqués to US Custom and Border Protection with regard to the number of trucks allowed to cross into the state at the entry point in question.

More News
A reader of the Morning Sentinel sums up the situation this way: "I live on Rt. 16 and the truck's (sic) you speak of travel this stretch of road all day every day, they often travel well over the posted speed and if you are going the speed limit they ride your bumper and pass in unsafe place's (sic).

Meantime, while her community's roads might be made safer for her friends and neighbors as a result of her actions, a widow is left to soldier on without her husband, and their children's father will never again be coming home.

In the end, a valued community citizen's legacy just may well be safer roads, and tighter restrictions for large-haul trucks for Kingfield's residents.

But it's tragic that basic common sense has to cost a life. And as Christmas nears, there will yet again be an un-opened gift under the Daly family's Christmas tree.