Cory has been hanging around trucks for 25 years; driving them, repairing them, loading them. Never once did he come close to a truck accident. His luck ran out just before Christmas thanks to the inattention of another driver.

"On December 22nd I was unloading the front part of a semi," recalls Cory. "We were moving on to the second trailer when the driver started pulling ahead but I was still in the way. She wasn't paying attention. If she'd looked in the mirror she would've seen me.

"It happened in just a couple seconds. The trailer tire caught on my coveralls, clenched my leg and pulled me under. There are dual wheels on a truck so it was the inside tire that ran over my ankle. 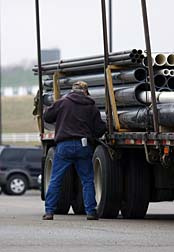 "I remember laying on the ground, screaming. They called an ambulance but ended up flying me to Bismarck in a small plane. In the hospital they tried surgery that same day but on December 31st, they amputated, what they call a mid-calf amputation, below the knee. I figured it would be amputated, I kind of knew, but...."

Cory was released five days later although he would have preferred to stay a few days longer to feel healthier. At home his activities became centered around watching television and exercising what was left of his left leg. I've been on painkillers since the day of the accident," says Cory. "They help keep the pain down to a moderate level but it wears off as the day goes on."

More TRUCK ACCIDENT News
Cory puts the truck accident down to driver negligence and holds the company responsible. "I had been working three or four months for S & S Sales in Williston in the yard unloading. That driver wasn't paying attention.

"What I'm concerned about are my options. I'm on workman's compensation now. They say if I go through workman's comp and sign off, then the company has no responsibility. So if I want to sue them I have to quit workman's comp. I've got great coverage with them now but I'm worried about the long term-- it's only good for two years even though I'm classified as 'totally temperate disability'.

"A good lawsuit would help keep me going the rest of my life."