Michigan Attorney Steve Gursten has reached his breaking point with bad truckers. With years of experience representing people injured or killed by dangerous trucks and truckers in truck accidents and a former president of the Truck Litigation Committee for the American Association of Justice (AAJ), Gursten says he is frankly "disgusted" with what he sees. 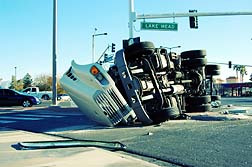 "We keep seeing the same kinds of cases over and over: trucks with safety violations, unfit drivers who have had licenses revoked several times or even kill people and they are still on the road," Gursten says. "And I am tired of seeing preventable tragedies."

Gursten recently represented the family of a man who was killed on a Michigan highway after a truck with a cracked steering column, bad brakes and bald tires had a blowout and knocked the man's car into a median. "The car smashed into the median and a husband and father of two little girls was burned alive because of a truck that never should have been on the road," says Gursten, his voice tinged with anger and frustration at the situation.

The lack of safety in the trucking industry is a "national public safety crisis" according to Gursten and he has the facts to back him up.

According to a new analysis of information gathered by the AAJ from the Federal Motor Carrier Safety Administration (FMCSA), as many as 4000 Americans a year are killed in collisions with trucks that have incurred thousands of safety violations, such as defective brakes, bad tires or loads that dangerously exceed weight limits. Many of the truck drivers involved have little or no training and many others have a history of drug and alcohol abuse.

Gursten recently obtained documents through a Freedom of Information Act (FOIA) application for his home state of Michigan. Gursten says the documents revealed more startling information about an industry that continues to recklessly roam American roads.

"There are 1,072 trucks just in Michigan that have less than satisfactory ratings according to the federal government," says Gursten, "and about one in four is dangerously out-of-service according to road side checks."

Gursten is a recognized leader in personal injury litigation against truckers and the trucking industry and probably handles more trucking cases than any other attorney in the state of Michigan. His firm has at least 50 cases going through the courts right now.

As Gursten sizes up the situation, financial troubles in both the trucking industry and state agencies are making an already dangerous situation even worse. "You have trucking companies cutting back on safety because money is tight and at the exact same time you have less regulatory authority from state agencies because governments have no money," he says.

Even more troubling to Gursten is Michigan law that prevents courts from awarding punitive damages in personal injury and wrongful death suits against trucking companies--a situation he believes allows trucking companies to take chances they wouldn't take in other states.

More Truck Accident News
"What I have found is many of the truckers come to Michigan because they are so dangerous that they can't get jobs in other states where they punish companies for hiring unfit drivers," says Gursten. "The companies know they will never be held accountable here and or have to pay punitive damages. They know the worst that will happen is that the insurance company will pay for the accident."

Steve Gursten is an acclaimed attorney practicing exclusively in the area of car accident, truck accident and motorcycle accident cases. He was recently named Lawyer of the Year and a Leader in the Law. In 2008, Gursten won the highest auto injury jury verdict award of $5.65 million for a pedestrian hit and run who was seriously injured by a pickup truck. Michigan Auto Law has offices in Southfield, Detroit, Ann Arbor, Grand Rapids and Sterling Heights.