“A Truck Crash Is Not a Car Crash,” Says Florida Litigation Lawyer

Attorney Joseph Camerlengo rarely let’s a week go by without tapping into Transport Topics, a website Camerlengo describes as “The Wall Street Journal” of the transportation industry. He’s a fastidious reader of trending transport issues because the entire focus of his practice is on an increasing complex area of the law involving personal injury related to trucking accidents. 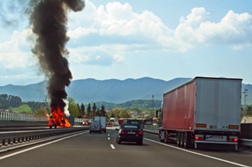 While passenger car safety is improving, truck accidents are scaling up. There is an estimated 35% shortage of truck drivers in the US, and the Insurance Institute for Highway Safety and Highway Loss Data Institute (IIHS-HLDI) says drivers routinely drive more than the permitted 77 hours a week.

“As technological advancements improve (advance collision warning systems), the number of car and passenger car crashes is being reduced but the same cannot be said for truck accidents,” says Camerlengo, from the firm of Coker, Schickel, Sorenson, Posgay, Camerlengo & Iracki.

According to IIHS, “the number of people who died in large truck crashes was 14 percent higher in 2013 than in 2009, when it was lower than at any year since the collection of fatal crash data began in 1975.

“The big picture is that the number of trucking crashes and fatalities are going up exponentially while other types of highway crashes are declining.”

And according to the same report,
“about one in ten highway crash deaths involves a large truck.”

A passenger vehicle is simply no match for a large truck, which is likely to be 20 or 30 times the weight of a car. Camerlengo’s job involves finding compensation for those persons often catastrophically injured - their lives permanently changed, damaged or lost in trucking accidents.

“When there is a tractor trailer wreck it often involves multiple serious injuries or multiple fatalities,” says Camerlengo. “When you look at the cost of medical expenses for someone involved in this kind of accident, it can exceed a million dollars in a heartbeat.”

(Federal Motor Carrier Safety Administration [FMCSA] is currently seeking opinions and considering whether or not to raise the minimum level of insurance motor carriers must have to operate. Since 1985, that minimum has been $750,000 for interstate general freight motor carriers and between $1 million and $5 million for various types of hazardous-materials haulers.)

“A truck crash is not like a car crash,” says Camerlengo. “Litigating against the trucking industry is a complex area of the law. The guys and girls in our firm (Coker, Schickel, Sorenson, Posgay, Camerlengo & Iracki) deal with this regularly. They are skilled in finding those added defendants involved in the transportation cycle with liability.

“So when you get these bad wrecks, when there are three or four or five people injured or killed, those limits are unacceptable,” says Camerlengo. “You need an experienced trucking litigation attorney to know where to find coverage over and above that $1 million limit.”

He’s currently pursuing litigation on behalf of the estate and the husband of a woman and her three children who were burned to death on a highway in Florida in March 2015, when a tractor trailer failed to see that Yakel Culclager’s Chevy Tahoe had stalled and was parked in the left lane of highway 1-295.

The truck first slammed into a Nissan Murano that had stopped behind Culclager’s SUV and then kept going. The Tahoe was tossed hundreds of feet down the highway and exploded. Culclager was talking to her husband on a cell phone at the time of the accident. He heard the sounds of the crash as it happened.

More TRUCK ACCIDENT News
The semi was owned and operated by driver Judson Humphries. The listed defendants in the documents filed include Humphries, as well as Hobit Express and Suntek Motor Carrier that contracted Humphries, and also includes the brokerage company Sunteck Brokerage.

The complaint alleges, among other things, that Humphries was distracted, driving his vehicle on cruise control in a dangerous and reckless manner. It also alleges that Humphries was not properly qualified and that the contracting companies knew or ought to have known that.

The suit claims damages in excess of $10 million on behalf of the husband of the late Yakel Culclager.

Camerlengo has been practicing trucking litigation law for over a decade. He will be chairing the Trucking Litigation Group at the AAJ Annual Convention in Montreal in July 2015.

If you or a loved one have suffered losses in this case, please click the link below and your complaint will be sent to a personal injury lawyer who may evaluate your Truck Accident claim at no cost or obligation.
Request Legal Help Now

Posted by
William Kenworthy
on August 9, 2015
I absolutely agree with the argument that insurance limits for trucking need to be increased. The limits were set 30 years ago. The issues in this area of law are complex. My book, Transportation Safety and Insurance Law, published by Lexis, is a useful resource in this area of law. It also covers the basics of insurance in this industry.
Posted by
Patrick
on June 7, 2015
Recently within just a few days there were 2 semi truck accidents on interstates near Savannah GA killing 10 people. These horrendous accidents have to be stopped. Trucking companies are hiring any and everybody, with not enough experience. Governors and legislators of each state must do something or have blood on their hands.

Click to learn more about LawyersandSettlements.com
LawyersandSettlements.com - A trusted, independent legal news provider bringing quality news and information on legal cases and lawsuits filed in the United States of America to its readers since 2002. Over 650,000 legal help requests including Personal Injury Cases, Accidents, and Automotive accidents have been forwarded to lawyers all across to the country.