Trasylol: "Lawyer is Getting My Medical Report"

Darlene White had emergency heart surgery in 2004 and had a good recovery. But one month later, she was back in hospital, this time due to kidney failure. White is now in the process of obtaining her medical records to determine whether she was given [Trasylol] during open-heart surgery.

"The ambulance took me to University Hospital and after a bunch of tests, they determined that I had a blown aortic valve," says White (not her real name pending a lawsuit). "It was very scary - we're talking life and death here." They replaced the valve and also did a bypass—fortunately White had a fast recovery and about a week later they sent her home. Little did she know that other medical problems were in store.

"I did really well at first," says White, " then about one month later I had to go back to the hospital because my blood pressure shot up. They admitted me right away, changed my medication and got my blood pressure under control. Then I went to my doctor at Thanksgiving week this year; he did more tests and checked my kidneys at the same time. My doctor told me that my kidneys are failing. 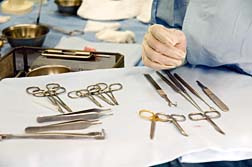 This news came right out of the blue. I have never had kidney problems and the only side effects that I had from the heart surgery was that I tired easily - but I just thought this was due to my heart. I asked him what could have caused this? My primary doctor contacted my heart doctor and right now I am in a holding pattern: I am waiting to be re-tested for any more kidney failure.

In the meantime, my doctor told me that I am not at the dialysis stage—yet. But I really have to watch what I eat and drink and keep my blood pressure down. He doesn't want to prescribe any medication until I get re-tested.

About three or four days after I was told about my kidneys, I happened to see an advertisement on TV about open-heart surgery and Trasylol. 'This is unreal,' I told my husband on the phone. By the time he got home, I was sitting on the couch in shock. They had fixed my heart valve but, if I had taken that drug, they ruined my kidneys. As well, I felt that it at least gave me an explanation. If I was given this drug, there would be a reason for my kidneys to be failing.

I was very depressed when I came home from my doctor. With kidney failure, you don't know how long you are going to live, I don't even know if I will be alive 10 years from now. And with my heart condition, I don't think I would be a candidate for a kidney transplant.

More News
I still don't know why my doctor decided to test me for kidney problems—at that time I was too upset to ask him. I never had any kidney infections so there was no reason, unless he heard about Trasylol and knows something I don't know. It seems too coincidental—what other reason could there be? The doctors cannot understand why I am having renal failure.

I then looked up Trasylol on the internet and contacted your lawyer. They wanted to know if I had my medical records. The hospital gave me a standard medical record that just said I had open heart surgery but it didn't list any drugs that were used—my medical doctor has to request the surgical report and he is supposed to be checking into it but you know how long it takes to get paperwork together. So my lawyer is getting my medical and surgical report to speed things up.

If the makers of Trasylol knew it was causing problems and still gave it to people, they can't pay enough money; no amount of money is going to replace my health."