Trasylol: A Longer Road to Recovery

Colleen Dureski was given one dose of Trasylol during cardiac surgery. Only days earlier, an article was published in a national newspaper linking the drug to kidney failure. Unfortunately, not even the medical team at the hospital had read the article.

"On January 31, 2006, I was given aprotinin (marketed as Trasylol) to stop excess bleeding during heart replacement surgery," says Colleen. She was born with a congenital defect - a malformed aortic valve - and knew that she would have to undergo surgery one day. But Colleen wasn't prepared for the outcome. 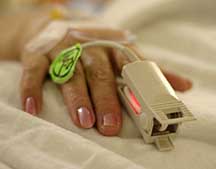 "I was in hospital for a week recovering from surgery," she says. "Four days after I returned home I got really sick; I couldn't walk due to severe joint pain and I had retained about 60 pounds of extra fluid - my hands were swollen beyond use. The ambulance rushed me back to hospital and at first they thought I had a heart infection from the surgery. I was air-lifted to a hospital in Calgary and it was there that I was diagnosed with kidney failure.

I had a barrage of tests and my kidney function was at zero. I had dialysis three times and spent one month in hospital. This came right out of the blue - I am only 41 years old with a clean bill of health (except for my genetic heart valve problem) and nobody in my family had any kidney disease.

After I was discharged, I had a follow-up appointment with my nephrologist. He asked me if I knew what had caused my kidney failure. I didn't know for certain, but he told me that it was from aprotinin. Then I remembered what the cardiac specialist told me when I was in ICU; 'You had quite a lot of bleeding during surgery so we gave you Trasylol.' I didn't think much more about it, until I came home and put two and two together. I looked up Trasylol on the Internet and there was a warning: this drug could cause kidney failure.

I believe that, when I was given this drug, the doctors had no idea of the consequences. The news was just breaking: my surgery was on January 31st and an article linking Trasylol to kidney failure ran in the Globe & Mail on January 27th. Or perhaps some people in the medical profession thought the results outweigh the risks. But I have to deal with kidney disease for the rest of my life.

As for the cardiologist who gave me Trasylol, I am scheduled to see her in a few months and I will definitely ask why I was given this drug over other options. I don't think there was any impropriety - the doctors just didn't get the information from the drug company.

I would hope that the medical community would be informed about side affects as serious as kidney failure from the drug company before reading about it in the newspaper. I think the drug company wanted to keep this problem a secret. If the doctors had all the information, this wouldn't have happened. After all, they don't want to deal with surgical failure.

More News
I couldn't comprehend how this could have happened but my sister is a pharmacist and she explained that drug companies have a lot of money and have the ability to come in and manipulate a market. It takes a long time before the same generic drugs can be sold and used so the big companies have a golden opportunity to make money. Once the hospital uses a brand name such as Trasylol, they stay with it; they don't want to take unnecessary risks. Why would they change to a drug they are uncertain about? At a hospital you get Tylenol, not a generic drug. These companies are firmly entrenched in medical centers - they come in with samples and incentives.

Today I am doing OK but I have to follow a strict diet and make sure I exercise daily. Right now I have about 20 percent kidney function which means I will likely need dialysis soon and I will probably need a transplant. Several members of my family have been tested for a transplant, but that isn't a good thing; I dread the thought of having another surgery.

If you or a loved one has experienced kidney or heart failure after heart surgery, please contact a [Trasylol] lawyer who will evaluate your claim at no charge.
Request Legal Help Now