In what amounts to a further damnation of Bayer AG's Trasylol and a huge setback for the manufacturer, the US Food and Drug Administration (FDA) announced in a joint communiqué with Bayer AG that a Canadian clinical trial has been halted over concerns that one of the drugs being reviewed increases the risk of death.

Dr. Paul Hebert, a researcher with the Ottawa Health Research Institute, was leading the study. He was not immediately available for comment.

While not unprecedented, it is rare that a clinical trial be halted due to the nature, and safety of the drug under review. What is equally compelling is that despite ongoing debate over Trasylol's safety and merits, an expert panel convened by the FDA recommended in mid-September that Trasylol, known generically as aprotinin--remain on the market. 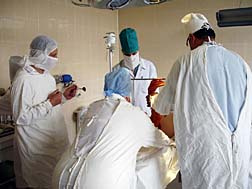 Now, less than a month later, the FDA is supporting the recommendations of the BART Executive Committee that no new patients be enrolled in the study after periodic analysis of trial participants receiving aprotinin revealed increased deaths among the study group.

The plug was effectively pulled by the BART Data Safety Monitoring Board, which notified the various interests late last week.

Trasylol, manufactured by Bayer AG, has long been under the microscope. While intended to reduce the risk of blood loss during cardiovascular surgery, aprotinin is either a known or suspected link to kidney failure, brain disease, and additional heart problems. The findings of two independent studies prompted the FDA to issue warnings about Trasylol, and the agency continues to monitor incident reports.

One of the studies found that aprotinin patients had twice the risk of developing kidney failure, and Trasylol use more than doubled the risk of heart failure. The study also revealed a 181 per cent increased risk of stroke.

According to the American Heart Association, there are a staggering six million cardiovascular operations performed each year. Given Trasylol's capacity to reduce blood loss and mitigate the need for transfusions, it's little wonder that Trasylol racked up sales for Bayer AG estimated to be about $600 million in 2006.

However, side effects remain a concern. Worse, most patients are not even aware they have been subjected to an aprotinin injection, and therefore have no way of knowing if continued heart, kidney or brain problems are a result of a Trasylol injection.

Some in the medical community are urging hospitals and surgeons to inform all patients for whom aprotinin was administered.

The Canadian-led clinical trial--Blood Conservation using Antifibrinolytics: A Randomized Trial in High-Risk Cardiac Surgery Patients, condensed into the acryonym BART--involved 3000 high-risk cardiac patients who were either going through a subsequent operation for a coronary heart bypass graft, aortic valve replacement, or a combined valve-graft procedure. They were to be randomly assigned one of three drugs that were being used for comparison purposes: aprotinin, aminocaproic acid and tranexamic acid. At issue was the safety and effectiveness of the three antifibrinolytic drugs.

In a statement, the FDA said it would—again--evaluate the overall risks and benefits of Trasylol.

More News
"Until this process has been completed, health-care providers who are considering use of Trasylol should be aware of the risks and benefits described in the labelling for Trasylol and the accumulating data suggesting Trasylol administration increases the risk for death compared to other antifibrinolytic drugs."

Bayer AG also issued a statement, indicating that it will be carefully studying the results of the multi-centre, multi-year trial.

"Bayer will continue to work closely with medical experts, the FDA and health authorities in countries where Trasylol is marketed, to re-evaluate the overall risk-benefit of the product and will evaluate the need for a label change and/or other actions as additional data and analyses become available from the BART trial."

The pharmacetical giant also issued a communique to doctors, advising them to carefully adhere to label directions and restrictions, while analysis of trial data continues.