Carmen Cortazar wants to know why her 35-year-old sister passed away two years ago during open heart surgery. So far, she doesn't have any answers. One thing the doctors did tell her was that her sister's kidneys could not be donated because they were damaged due to a medication used during surgery. Cortazar thinks that medication could have been Trasylol.

Maria, Cortazar's sister, was diagnosed with rheumatic fever as a young teenager which led to heart disease—her valves weren't opening and closing properly. At 18, she had her first open-heart surgery and was given a cow's heart valve; in 2005 another surgery replaced that valve. Complications arose during this second surgery—at University Hospital in San Antonio, TX. "She was in a coma for some time but pulled out of it," says Cortazar. 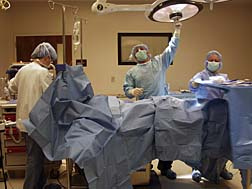 Fast forward to November, 2006. "Maria started to get chest pains and shortness of breath so there were a few problems that weren't repaired from her surgery a year ago," says Cortazar. "She had another operation on December 15th but never woke up.

"We put a lot of pressure on the doctors; we wanted answers and didn't get any. We just got 'I don't know' answers. The two doctors we talked to finally narrowed it down to the fact that she either had an embolism or a stroke.

My sister was only 35 years old and now I am suspicious. I saw a commercial on TV about Trayslol. What brought this ad to my attention was just how it was stated: 'Did a loved one pass after open-heart surgery?' It really got me wondering. The doctors never gave me a definitive answer; there has to be a reason. Coincidentally, my aunt and uncle both died in 2004 when they had open-heart surgeries. My uncle died of an apparent heart attack. My cousin is also looking into this—he thinks Trasylol might be involved.

When this happened, we weren't aware of Trasylol either. So far, I have not been able to get in contact with anyone at the hospital but I will pursue this, especially because we know that Maria's kidneys were damaged—a side effect from Trasylol.

This is how we knew about her kidneys: my mother needed a kidney transplant and after Maria passed away, the doctors told us that the amount of medication used during her surgery damaged her kidneys and neither one could be used as a donor kidney.

More News
When Maria passed away, my husband came back from Iraq on emergency leave. We are now looking after her five kids, including my three-- it's a full house. As you can imagine, I haven't had a chance to look into obtaining her medical reports—first I have to be their legal guardian. (Her husband is out of the picture.)

My lawyer told me to go through with custody. Once I am their legal guardian, it is the children's rights to obtain their mother's medical records. Up until that time, my hands are tied. But I am going to start the process next month.

My sister didn't have life insurance and nothing was saved for the kids. I want to pursue this case for my nieces and nephews—even if it is a long shot. At least until my lawyer reads the medical reports."