Trasylol Could Have Caused Stroke

Two years ago Tony Johnson had open heart surgery to replace an aortic valve. The surgery was successful but something worse happened while he was on the operating table. Now, Johnson is sifting through his medical reports to find out if Trasylol was administered during surgery.

Trasylol was approved for use to control excessive bleeding during heart surgery in patients at particular risk for this complication: Many types of cardiovascular surgery, including heart valve replacement, have the potential for serious bleeding. Bayer Pharmaceuticals Corp. has since stopped marketing Trasylol.

"When I woke up in the recovery room, I had lost half my vision," says 35-year-old Johnson. "'Hey, why can't I see anything to the right,' I asked the first doctor who attended to me. My vision was all fuzzy because I was just coming out of the anesthesia, but it was like my right eye was closed." 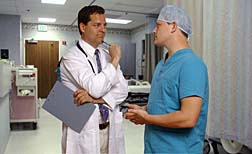 The doctors weren't yet aware that Johnson had suffered a stroke during the operation.

"They said they didn't know what was wrong with me and they ran some vision tests," says Johnson. "They checked my eyes and everything was fine. And they checked everything else except for brain damage. Finally, one day later, I had a CAT Scan and they discovered that I had a stroke during surgery.

My surgeon didn't even tell me. On-staff doctors were looking after me and they told me what happened. This happened to me when I was 33, two years ago. Even though I always had a valve condition, I am still bitter, to say the least, about having a stroke while in hospital.

They kept me in the hospital for one week to recover and then sent me home and to outpatient rehab. As for my vision, they just said 'go to rehab and learn to deal with it.' I'm sure they were a bit more politically correct and didn't use these exact words, but that is how the message was conveyed to me.

I have spells of numbness on the entire right side of my body, but it comes and goes. I never got my vision back; it is called 'a right field cut' which means that I have no right peripheral vision. It would be like standing right next to a white wall.

During surgery, I am not certain that the doctors used Trasylol. But my symptoms are very coincidental—a stroke during open-heart surgery. When I did some research online and read on the Bayer website that Trasylol was a contributor to blood clots, it made sense. Nobody in my family has a history of blood clots.

More News
I never talked to the surgeon about this nor did I talk to my cardiologist because it didn't occur to me two years ago—Trasylol wasn't in the news then like it is today. I don't want to talk to my doctor about this now because I don't want to get him involved in a malpractice suit. At the same time, I still want to know what caused my stroke. There is so much medical jargon in my report that it is going to take a medical lawyer to sift through this.

And I am afraid that doctors might stonewall me. I still have to go back to this same hospital for another operation in a few years—to get another valve replaced—and I certainly don't want to be treated any differently. I'm not a conspiracy theorist but why rock the boat if I haven't got a case?

Having said that, I want to know if I have a case; I would like someone to tell me whether or not Trasylol was used. Then I can go forward or deal with my loss.

Either way, I'm glad to get my story out—this has made me feel better and my story might prompt someone else to carefully go through their medical reports."