Christine S. says she and her husband watched the 60 Minutes Trasylol article in shock. When the report ended, she says they looked at each other and said, "That sounds like Mother, doesn't it?"

"She had a pig's valve placed and we went to see her afterwards. She seemed to be okay after the surgery. She was weak, but that was to be expected. But then, not long after that, my husband received a call from his mother. She said she was diagnosed with renal failure. 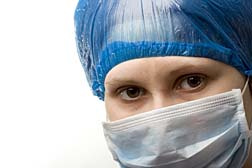 "There has never been anything like that in her past history. She was also a diabetic, but there was nothing else. No kidney damage at all. Nothing before the surgery. When her doctor told her, 'You've got to exercise for an hour a day and lose weight,' and do all sorts of things, she did those things to the letter. She kept an eye on her health.

"The kidney damage got bad and she had to go on dialysis. Every time we saw her, she looked a little bit weaker. Then, all of a sudden, she was on her way to dialysis and she died. I've never seen anything like that. I've never seen anyone go downhill as fast as she did.

"We watched 60 Minutes and the report came on about Trasylol. It was Sarah to the letter. So I asked my husband and his sister if they had any objections because I wanted to pursue this. I want to find out what's going on. If this drug was used—she went downhill so fast, it basically killed her.

"Prior to her heart surgery she was walking 2.5 miles a day on the treadmill. Then she experienced shortness of breath and found out about her heart. The doctor wanted to put a pig's valve in and afterwards he couldn't get over how well the surgery had gone. Sarah couldn't either. Afterwards, she was smiling and said that she'd never felt better. Then, bam, it [renal failure] hit.

"She had dialysis once a week. The doctors said that her health had deteriorated so much that she wouldn't have made it through [kidney transplant] surgery. She also decided herself that she didn't want the surgery. She said that she couldn't take a kidney away from a younger person who would need it.

More News
"Before you or any loved ones have surgery, they [doctors] need to discuss what drugs are going to be used during the surgery. Are there any kind of drugs that could be used other than what they are using? My understanding is that there are two other drugs on the market without the side effects that are cheaper to use. When you go in a hospital and you're on the table, you are totally at their mercy and the mercy of these drug companies. You may not be okay.

"This is making everybody scared, too scared to have [open heart] surgery done now. I'd think twice about having the surgery. Ten years ago if that's what my doctor said to do, I'd need to do it. Now, she's dead. She's gone.

"It's hard to talk about, but I'll talk as long as someone wants me to. If this drug is dangerous, I'll do what I have to do to get it off the market. I wouldn't wish this pain on my worst enemy. It's horrible."