In a stunning response to concerns over a Canadian clinical trial, Bayer AG announced this morning that it has halted worldwide sales of Trasylol.

Long under a cloud of suspicion and concern, the reputation of Trasylol was further sullied a few weeks ago when the Ottawa-based clinical trial was abruptly halted after it was found that Trasylol could be linked to a higher risk of death than other drugs.

Known generically as aprotinin, Trasylol is used to prevent excessive bleeding during open-heart surgery. Introduced in 1993, Trasylol has been increasingly under the microscope since January of last year when safety concerns regarding the drug's propensity to cause serious side effects emerged. Specifically, Trasylol has been linked to increased risk for heart attack, kidney complications, and stroke. 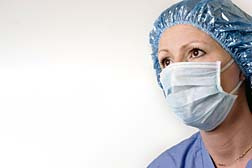 It wasn't much more than a month ago when a panel of US Food and Drug Administration (FDA) officials recommended that Trasylol remain on the market, for in its view there was insufficient data, and proof to warrant a market withdrawal.

The abrupt halt of the Canadian study two weeks ago seems to have changed all that.

The Canadian-led clinical trial--Blood Conservation using Antifibrinolytics: A Randomized Trial in High-Risk Cardiac Surgery Patients, condensed into the acryonym BART--involved 3000 high-risk cardiac patients who were either going through a subsequent operation for a coronary heart bypass graft, aortic valve replacement, or a combined valve-graft procedure. They were to be randomly assigned one of three drugs that were being used for comparison purposes: aprotinin, aminocaproic acid, and tranexamic acid. At issue was the safety, and effectiveness of the three antifibrinolytic drugs.

The BART Data Safety Monitoring Board recommended two weeks ago that no new patients be enrolled in the study due to the concerns expressed, and pending further analysis of existing data. At the time, the FDA took a pass on urging a market recall, and instead announced that it was reserving judgement until the issue was studied further.

According to an article in the [New York Times], Bayer bowed to government pressure. In the article, the FDA is identified as asking Bayer AG to stop selling Trasylol, which appears to be a recent development, and far removed from the FDA's previous stand-pat position.

In making the decision to pull Trasylol from the market, Bayer AG consulted the FDA as well as Health Canada and the German Federal Institute for Drugs and Medicine Products.

Bayer AG is based in Leverkusen, Germany.

Much has been said about the impact of the Canadian study, and the reasons for its abrupt halt. And the focus will remain with the randomized Canadian clinical trial for some time, as the study included patients who underwent multiple types of surgery, beyond the specific type of bypass surgery for which Trasylol was approved. According to Dr. Rafel Rieves, director of the FDA's Office of Medical Imaging and Hematology, much more analysis and dissection of the Canadian BART data needs to happen before the real risks and benefits of Trasylol can be weighed.

It will be interesting to see the outcome of this event, given the performance of Trasylol in a marketplace that doesn't have a lot of alternatives for surgeons faced with the possibility of excessive bleeding during surgery.

In an interesting aside, The FDA has said it will work with Bayer AG to gradually phase Trasylol out of the marketplace altogether, in a fashion that does not cause shortages of other drugs designed and approved to stop excessive bleeding during surgery.

However, this serves as somewhat of a disconnect, as Bayer AG is on record as saying the global market recall of Trasylol is only a temporary measure, which will be re-evaluated once further studies and analysis of data is complete.

More News
Trasylol represented revenues to Bayer AG of $600 million in 2006. With six million cardiovascular surgeries performed each year in the United States, and an aging baby boom population, it can be presumed that Bayer AG will not wrestle Trasylol down without a fight. For now, the drug is pinned to the mat, but the match is far from over and a decision not yet forthcoming.

In the interim, patients to whom Trasylol was administered during surgery may never know if their increased risk of developing kidney failure, and a doubled risk of heart failure, is due to the drug, as the occurrence of a Trasylol injection is rarely communicated with the patient.

Given the risks associated with Trasylol, it should be. One study revealed a 181 per cent increased risk of stroke with Trasylol use.

For them, the damage may already be done.